Next Week: US President Bush Vomits On Japanese Leader →

Khmer Rouge Is Overthrown In Cambodia

After nearly 4 years in power, the regime led by Pol Pot is brought down.

In 1979, the Communist Khmer Rouge government was overthrown by Vietnamese forces. Pol Pot's regime took power in 1975 after the corrupt Lon Nol government lost US support following the USA's defeat in Vietnam. The Khmer Rouge murdered thousands of Cambodians in their prisons. Hundreds of thousands more died from starvation and disease due to the regime's agricultural collectivization policies.

overthrow (verb): forcibly remove from power (usu. a government)
regime (noun): a government (esp. an autocratic or repressive one)
corrupt (adjective): without morals; not caring for what is right
starvation (noun): severe suffering or death caused by not having enough food to eat
collectivization (noun): a system of joint ownership and operation 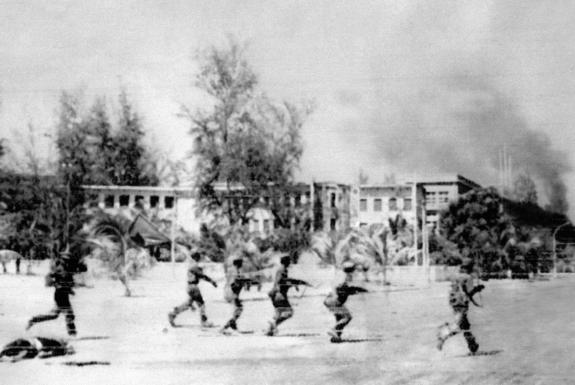 1. The Communist Khmer Rouge government in Cambodia was overthrown in 1979 by
a) the USA
b) Vietnam
c) Thailand

3. Which of these people would not be seen as "corrupt"?
a) a government official who takes bribes
b) a businessman who pays bribes
c) a journalist who investigates bribes

Next Week: US President Bush Vomits On Japanese Leader →