In 1968, black civil rights leader Martin Luther King was shot and killed by an assassin in Memphis, Tennessee. King had struggled for the rights of African-Americans since the early 1950's. He was a powerful public speaker and an inspiring leader of the civil rights movement. James Earl Ray was convicted of murdering King, though to this day many people, including King's family, believe Ray did not act alone. Every year, on the third Monday of January, Martin Luther King Day is a public holiday in the USA.

assassinate (verb): target and kill a (usually well-known) person
assassin (noun): person who targets and kills someone
rights (noun): legal and moral entitlement to have or do something
inspiring (adjective): causing one to feel uplifted and ready to act
civil rights movement (noun): people wanting political/social freedom & equal rights for all
convict (verb): decide that someone is guilty (in a court of law) 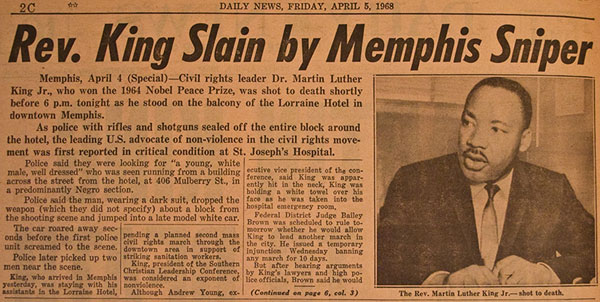 Newspaper headline records assassination of Martin Luther King.
Rev. (abbreviation of adjective Reverend): used as a title for a member of the clergy
slay (verb - past slew; past participle slain): to kill in a violent way
sniper (noun): someone who shoots a gun accurately from a long distance
This is a classic newspaper headline, which as a complete sentence would be:
"The Reverend Martin Luther King has been slain by a Memphis sniper."

1. Martin Luther King was a civil rights leader
a) in the African-American community
b) from Memphis, Tennessee
c) before the early 1950's

3. A civil rights movement is a movement that aims to end
a) equality among races, genders and religions
b) discrimination against certain groups in society
c) laws that favour disadvantaged groups