In 1953, New Zealander Edmund Hillary and Nepalese Sherpa Tenzing Norgay became the first people to reach the summit of Mount Everest. Standing on the border of Nepal and Tibet, Mount Everest is the world's highest mountain, rising 29,028 feet (8,847 m) above sea level. The two climbers stayed on the summit for only 15 minutes because they were low on oxygen, but while there Hillary took several photographs while Tenzing buried sweets and biscuits in the snow as a Buddhist offering to the gods.

conquer (verb): defeat; achieve an extremely difficult goal; climb (a mountain) to the top
summit (noun): the very top of a mountain
oxygen (noun): colourless gas that makes up 20% of our atmosphere (air)
bury (verb): put or hide under earth, rocks, snow etc
offering (noun): the giving of something; a present; a gift 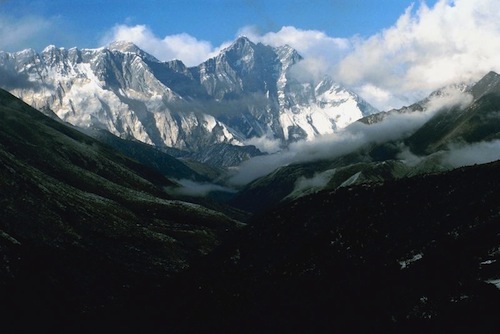 In English, the highest mountain on earth is called Mount Everest (also written as Mt Everest) after the British surveyor Sir George Everest. In Tibetan it is called Chomolungma or Qomolangma (meaning Goddess of the Land). In Nepali it is called Sagarmatha (meaning Head of the Sea).

2. The climbers would have stayed longer than 15 minutes if they'd had
a) more photographic film
b) more sweets and biscuits
c) more oxygen

3. The highest point on a mountain is called
a) the summit
b) the upper
c) the viewpoint