The Bastille Is Attacked In Paris

French revolutionaries attack and overtake the most despised prison in France, "The Bastille".

In 1789, opponents of the French monarchy stormed "The Bastille", the most notorious prison in France at the time. This prison had long been seen as a symbol of the oppressive regime of King Louis XVI, and its fall is regarded as central to the French Revolution and the establishment of the First Republic. The event is celebrated every year in France on "Bastille Day", a national holiday.

revolutionaries (noun): people who are trying to create major change (usually political)
despised (adjective): hated; treated with contempt
opponent (noun): person or group on the other side in a game or conflict
storm (verb): attack or go into an area very quickly and with great force
notorious (adjective): very well known (often used in a bad or negative sense)
establishment (noun): the forming of something new; founding 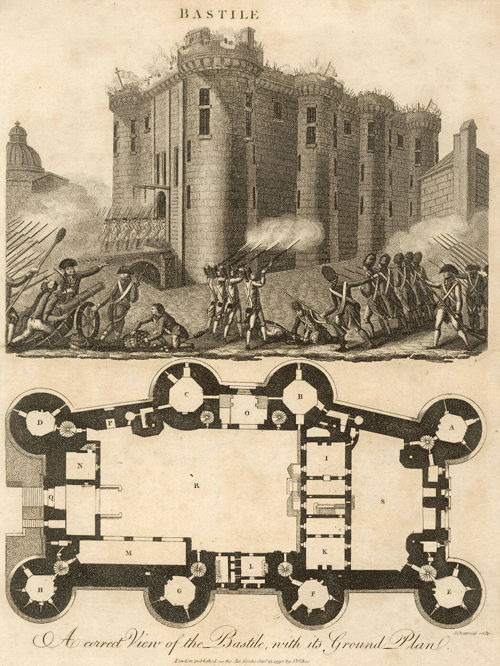 (Top) The storming of the Bastille prison marked the beginning of the French Revolution. (Bottom) Ground Plan of the historic prison.

1. "The Bastille" was seen as a symbol of
a) the French Revolution
b) King Louis XVI's regime
c) the First Republic

2. The First Republic was established by
a) King Louis XVI
b) opponents of King Louis XVI's regime
c) prisoners in "The Bastille"

Next Week: Spanish Civil War Begins →
Contributor: Matt Errey. Matt is the author of several books including 1000 Phrasal Verbs in Context and Common English Idioms for learners, and Matt's ESL Games and Quizzes for teachers. He is also creator of WORD UP, the world's #1 EFL board game.