The tomb of the ancient Egyptian "boy king" is opened for the first time in over 3,000 years.

In 1922, British archaeologist Howard Carter opened the tomb of the ancient Egyptian pharaoh or "boy king" Tutankhamen. It was the first tomb to be found that had not been raided by thieves since it was sealed over 3,000 years ago. Among the remarkable objects found inside were a gold throne, couches, chariots, statues and priceless jewellery. Carter also found the mummified body of the teenage king lying inside a solid gold coffin and wearing a beautiful, life-like solid gold mask.

tomb (noun): an enclosed space in which a dead body is kept (may be above or below ground)
archaeologist (noun): person who studies the past by excavating historical sites
raid (verb): enter or attack quickly (with no notice or warning)
chariot (noun): a two-wheeled vehicle pulled by a horse or horses
priceless (adjective): so unique or amazing that its value cannot be measured
mummified (adjective): preserved with cloth and special chemicals (usually a dead body) 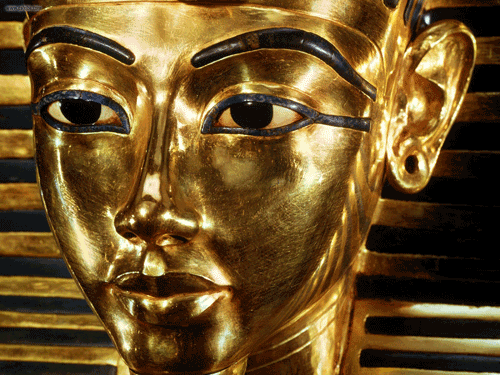 The death mask or funeral mask of Egyptian pharaoh Tutankhamen, which weighs about 11kg, is made of gold inlaid with semiprecious stones.

2. When he was entombed, Tutankhamen was wearing
a) a life-like mask
b) a priceless gold crown
c) a solid-gold coffin

3. Ancient Egyptians mummified important people
a) to help them live a long life
b) when they became adults
c) after they had died