US Forces Occupy The Philippines

The USA claims the Philippines as a "ceded territory" and takes control using military force.

In 1898, US President William McKinley claimed the Philippines as "ceded" to the USA, and ordered the US army to use force to take over the country. Filipino fighters resisted the Americans, however, and the American War In The Philippines began. More than 120,000 American soldiers fought and at least 4,200 were killed. Over 16,000 Filipino fighters were killed and over 200,000 civilians died during the war, mostly from famine and disease. The struggle continued until the Filipinos were finally defeated in 1902. The US occupation that followed lasted until the Republic of the Philippines was established in 1946.

US forces (noun): military services of the USA; American army, navy, airforce etc
occupy (verb): physically move into and take over an area by military force
ceded territory (noun): a place or land that has been given to another power
struggle (noun): fight to win
famine (noun): a period when there is not enough food for people to eat 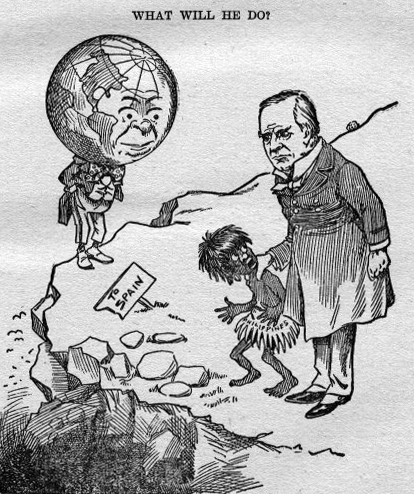 This contemporary American political cartoon depicts US President McKinley grasping the Philippines, which is portrayed as a primitive child. The cartoon title is "What will he do?", and on the left the world looks on, awaiting the President's decision. The only options in the cartoonist's mind appear to be to remain in the Philippines as a new colonial power or to return it to Spain, the former colonial power.
(originally published 1898 in the Minneapolis Tribune by unknown cartoonist)

1. In order to take control of the Philippines, the US government had to use
a) economic sanctions
b) democratic elections
c) military force

3. If one country is occupying another country, it is
a) controlling the country with military force
b) protecting the country from foreign control
c) providing development aid to the country