US President George Bush becomes ill and vomits on the Japanese Prime Minister.

In 1992, George H W Bush, the 41st President of the United States of America, attended a state dinner in Tokyo, Japan. Before the event, President Bush complained of feeling unwell and was advised by his doctor to stay in bed. However, the president decided to attend the dinner and was seated next to the Japanese Prime Minister Miyazawa Kiichi. During the meal, President Bush felt ill and turned and vomited on the Japanese Prime Minister. This remains the only recorded case of a head of state throwing up on the head of another country's government.

vomit (verb): release the contents of the stomach via the mouth; be sick
advise (verb): suggest; recommend
state dinner (noun): a formal meal shared by leaders of two or more countries
head of state (noun): the chief person who represents a country
throw up (verb - informal): vomit 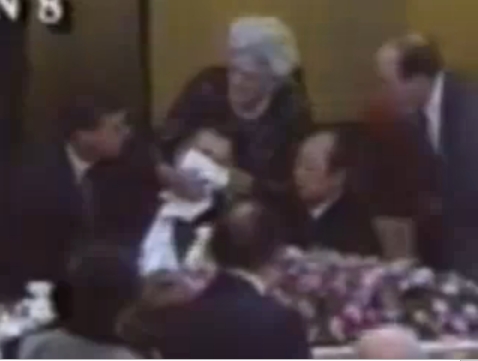 The President's wife Barbara Bush holds a napkin to Mr Bush's mouth after lifting her husband's head from the lap of the Japanese Prime Minister - seated to the President's left.
(Source: frame from ABC News footage)

1. President Bush vomited on the Japanese Prime Minister because
a) he disliked the Prime Minister
b) the food at the dinner was bad
c) he was feeling sick

2. The 41st President of the United Sates is the first head of state known to have
a) attended a state dinner while feeling sick
b) thrown up on another country's leader
c) left a state dinner early

3. President Bush attended the dinner even though
a) he'd been advised not to eat Japanese food
b) his wife had advised him to stay in bed
c) his doctor had advised him not to go

Next Week: Shah Of Iran Flees Uprising →
Contributor: Matt Errey. Matt is the author of several books including 1000 Phrasal Verbs in Context and Common English Idioms for learners, and Matt's ESL Games and Quizzes for teachers. He is also creator of WORD UP, the world's #1 EFL board game.