Next Week: Tutankhamen's Tomb Is Opened →

US President Is Shot In Texas

US President John F. Kennedy is killed by an assassin's bullets in Dallas, Texas.

In 1963, John F. Kennedy, the 35th president of the USA, was assassinated in Dallas, Texas, allegedly by Lee Harvey Oswald. Oswald was himself fatally shot soon after by Jack Ruby, a Dallas nightclub owner with ties to organized crime, before he could be charged or brought to trial. To this day, many believe Oswald did not act alone in organizing or carrying out the assassination.

assassin (noun): a killer who targets someone
allegedly (adverb): supposedly; according to someone (not necessarily true)
fatally (adverb): leading to death
organized crime (noun): long-term illegal activity planned carefully over a period of time
bring to trial (verb): take to court to be judged 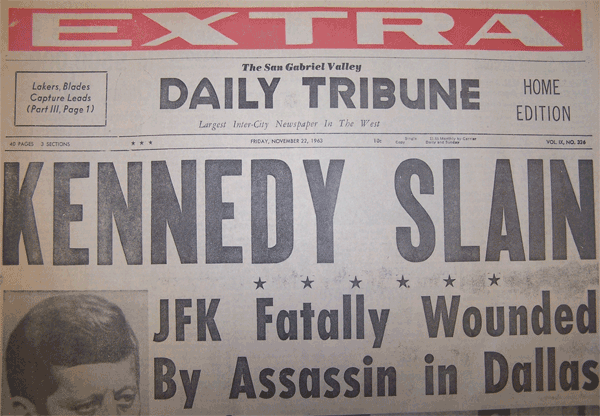 1. The assassination of John F. Kennedy was allegedly carried out by
a) a man called Lee Harvey Oswald
b) a team of professional killers
c) Dallas nightclub owner Jack Ruby

Next Week: Tutankhamen's Tomb Is Opened →