In 1890, a US army commanding officer, Colonel James Forsyth, ordered his troops to shoot Native American men, women and children at Wounded Knee Creek in South Dakota. At least 150 people were killed and another 50 wounded. Colonel Forsyth was charged with "killing the innocents" but was never punished for his actions.

troops (noun): soldiers and other armed forces
army commanding officer (noun): the person who is in charge of a specific military unit
wounded (adjective): hurt but not killed
charge (verb): accuse someone of a crime
innocents (noun): civilians who do not have weapons and are not directly involved in the battle 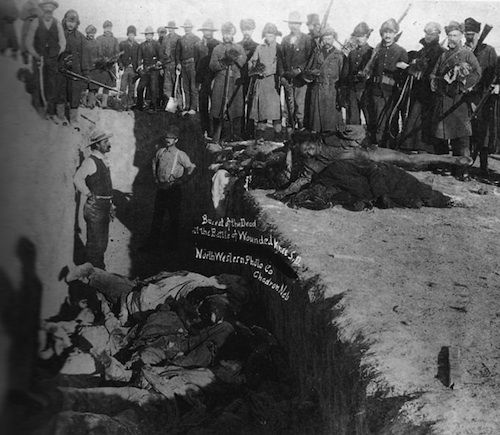 Mass burial of the dead following the Wounded Knee massacre.

2. The US commanding officer who ordered the massacre at Wounded Knee was eventually charged with "killing the innocents" and
a) executed for murder
b) imprisoned for life
c) allowed to go free