Men go mad in herds and recover one by one

This glossary of terms related to coronaviruses and COVID-19 in particular is intended for learners of English though it may be of interest to a wider audience. In times of crisis, knowing and understanding the terminology involved may help alleviate some of the fears and even panic that such times breed.

A virus is a micro-organism, too small to be seen without a microscope, that causes infectious disease in animals and humans.

In December 2019 a new disease was identified in China. On investigation, the disease was caused by a new virus of the coronavirus family, and has since been officially named COVID-19.

It is believed (subject to further investigation) that COVID-19 originated in the city of Wuhan in the province of Hubei in the country of China. It subsequently spread to other countries and was officially pronounced a pandemic by the World Health Organization (WHO) on 11 March 2020. 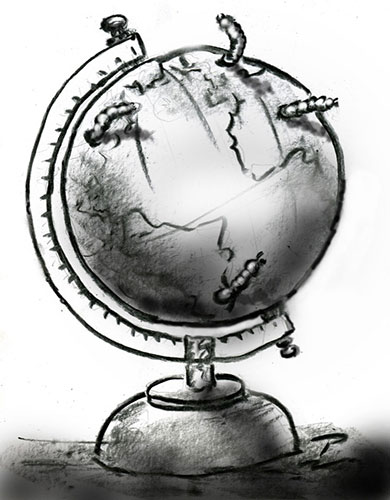 Science can flourish only in an atmosphere of free speech. Albert Einstein

Each of the following terms, listed in alphabetical order, has 1) a basic definition and 2) an example sentence showing how the term may be used in context.

While for simplicity we sometimes refer below to “humans and animals” or "animals and humans", we do of course recognize that humans are in fact animals.

asymptomatic (adjective): showing no symptoms of a particular disease - She had no idea her husband had coronavirus because he was asymptomatic.

carrier (noun): a person or animal that transmits a disease to others, whether suffering from it themselves or not - People who are asymptomatic can still be carriers.

carry (verb): be infected with a disease and able to transmit it to others, whether symptomatic or asymptomatic - Some people may carry coronavirus without knowing it.

community spread (noun): transmission of a disease directly within a community and not by importation from a foreign source - With this many new positive cases, the evidence suggests that we now have community spread right here in our county.

contact tracing (noun): identification and monitoring of people who may have had contact with an infectious person - By insisting on strict contact tracing as soon as someone was potentially infected, they managed to control the spread of the disease.

contagious (adjective): describing a disease that can pass from person to person, usually by direct contact; describing a person with such a disease. See infectious - Patients who are still contagious are kept in isolation.

coronavirus (noun): any one of a large family of viruses that can cause disease in the breathing and eating systems of humans and animals (respiratory and digestive systems). Coronavirus diseases can range from the relatively harmless common cold to more severe and potentially fatal diseases such as SARS (Severe Acute Respiratory Syndrome). Seen through a microscope, coronaviruses appear circular with spikes, like crowns 👑, and are named from the Latin for crown, which is corona. Coronaviruses normally originate in animals and usually cannot be passed to humans. But very occasionally a coronavirus mutates and can then be transmitted from animal to human, and then from human to human. This is how the SARS epidemic started in the early 2000s, for example - Did you know that the common cold can be a coronavirus disease?

COVID-19 (noun): official name for the novel coronavirus disease that emerged in China in 2019. COVID-19 = COronaVIrus Disease-2019 - All countries are requested to report any new confirmed case of COVID-19 within 48 hours.

diagnose (verb): identify an illness by examining the symptoms - Only a medical professional can properly diagnose the cause of your problem.

diagnosis (noun): identification of an illness by examination of the symptoms - If you're not happy with the doctor's diagnosis you could always get a second opinion.

disease (noun): illness; sickness; a disorder of the body - Polio is one of several serious diseases that have been nearly eradicated.

droplets (noun): the spray produced when people cough or sneeze, and which can spread diseases like COVID-19 - Health care personnel wear protective clothing to guard against the disease carried in droplets when infected people sneeze or cough.

epidemic (noun): occurrence of a particular disease in a large number of people in a particular area. See outbreak, pandemic - The city was devastated by an epidemic of cholera in the 19th century.

gain-of-function (noun): modification of a virus (naturally or artificially) that makes it more virulent or deadly - It is believed that scientists were secretly engaged in gain-of-function research in a race to create new bioweapons.

herd immunity (noun): an indirect protection from a disease resulting from a large percentage of the population gaining immunity (as a result of either recovering from the disease or being vaccinated) - This virus is unlike other coronaviruses because there is currently no herd immunity to it, he said. According to Prof. Sir Andrew Pollard, Director of the Oxford Vaccine Group, herd immunity to Covid-19 by vaccination is not possible because it still infects vaccinated individuals.

infect (verb): affect a human or animal with a disease-causing organism - But can it infect human beings?

infected (adjective/past participle): affected with a disease-causing organism - They were able to cure the infected left lung before the infection could spread to the right lung.

infectious (adjective): describing a disease that can be transmitted through the environment; describing a human or animal capable of spreading an infection. See contagious - Avoid the dogs as they may still be infectious.

isolate (verb): keep an infected person away from healthy people - They will isolate anyone suspected of having the disease.

isolation (noun): separation of infected people from healthy people for serious contagious diseases like COVID-19 - Travellers arriving from the infected area were immediately put in isolation.

lockdown (noun): official restriction of movement within or access to an area in the interests of public health - Sweden was one of the few countries that did not impose blanket lockdowns.

mask (noun): a piece of fibre or cloth that fits over the nose and mouth to protect other people from the wearer's germs and/or the wearer from germs in the air - The World Health Organization have historically offered varying advice on whether or when people should wear masks.

mass psychosis (noun): an epidemic, or even pandemic, of madness driven by individual irrational fear. It occurs when a large portion of society loses touch with reality and descends into delusion. Mass psychosis sufferers are unaware of their condition. In blind panic they subconsciously sink to a lower moral and spiritual level, becoming increasingly irrational, irresponsible, emotional and unstable — able finally to commit atrocities that they would normally be incapable of. - Psychologists cite the American and European witch hunts of the 16th/17th centuries and 20th-century totalitarianism as examples of mass psychosis.

outbreak (noun): a sudden occurrence of a disease (or other unpleasant thing). See epidemic, pandemic - There was another outbreak of the disease in 1993 but the cause was uncertain.

pandemic (noun): occurrence of a particular disease throughout a whole country or the world. See epidemic, outbreak - Just after the First World War there was a pandemic of flu which killed up to 40 million people worldwide.

pathogen (noun): a micro-organism or germ such as a bacterium or virus that can cause disease - Fortunately, most pathogens are dealt with by the body's immune system.

patient zero (noun): the person identified as the first to become infected with a disease in an outbreak - Authoritites usually try to determine who patient zero was in any given outbreak as can help answer important questions about how, when and why it started.

PCR test (noun): test that detects viral particles in blood or other body fluids. (PCR = polymerase chain reaction) - The PCR test is one of the tools that doctors use to diagnose certain coronavirus diseases.

personal protective equipment (PPE) (noun): special clothing, headgear, goggles, masks and other garments that shield people from injury or infection. - Much of the PPE worn by doctors and nurses has to be worn once only and destroyed after use.

person-to-person (adjective): describing the spread of a disease from one person to another, typically through touch including shaking hands, kissing, sexual intercourse etc. - In January an infected American woman returning home from China transmitted the virus to her husband, marking the first known example of person-to-person spread of the virus in the USA.

quarantine (noun): isolation and monitoring of people who seem healthy but may have been exposed to an infectious disease to see if they develop symptoms - For centuries it's been common for ships arriving from infected areas to be kept in quarantine at the docks, originally for 40 days which is where the term comes from.

screening (noun): testing of people for the presence of a disease. For COVID-19 the first step in screening is usually taking a person’s temperature - They now conduct screening for all incoming passengers.

self-isolate (verb): isolate oneself; put oneself in quarantine, away from other people - The prime minister's wife has tested positive for COVID-19 and the couple are now self-isolating and working by phone and Skype.

social distancing (noun): practice of encouraging people to minimize contact and closeness, whether by banning large or even small groups/meetings (football matches, nightclubs), or by maintaining a minimum distance between people (for example one metre or two metres) - The government has instructed schools to take social distancing measures to slow the spread of the virus.

superspreader (noun): person infected with a virus etc who transmits or spreads it to an unusually large number of people - One so-called "superspreader" in South Korea infected at least 37 people at her church with the virus.

symptomatic (adjective): showing symptoms of a particular disease - Anyone who is symptomatic is advised to phone a doctor and get tested.

symptoms (noun): a physical or mental feature that indicates illness/disease - Typical symptoms of COVID-19 are fever, coughing, and shortness of breath.

transmission (noun): transfer of a disease from animal to human or from human to human - Transmission of many diseases can be direct or indirect.

transmit (verb) - often passive: cause a disease to pass from animal to human or from human to human - Many diseases are transmitted through physical contact.

treat (verb): attempt to cure or alleviate an illness or injury through medical care - Doctors cannot currently treat COVID-19 directly and instead concentrate on relieving symptoms.

treatment (noun): medical care given to a patient for an illness or injury - There is currently no specific antiviral treatment for COVID-19, and infected patients receive supportive care to help relieve symptoms.

vaccine (noun): a substance used to protect humans and animals from a disease - A vaccine for cholera was invented in 1879.

vax (noun, informal): vaccine, vaccination - Have you had your flu vax this year? | anti-vaxer, anti-vaxxer (noun): a person opposed to vaccines and vaccination on principle - Some anti-vaxxers are against vaccines on religious grounds and others just believe vaccines are dangerous to health.

viral (adjective): describing something like, caused by, or relating to a virus or viruses - Antibiotics cannot be used to treat viral infections because they don't kill viruses, only bacteria.

virus (noun): a living thing, too small to be seen without a microscope, that causes infectious disease in animals and humans - Like all diseases caused by viruses, the common cold cannot be cured with antibiotics.

zoonotic (adjective): describing a disease that can be transmitted from animals to humans - To protect yourself from zoonotic diseases it's best to avoid bites and scratches from animals.

Nobody has the right to obey'