There is much confusion about the terms England, United Kingdom, Great Britain and Britain, as well as other terms such as British and English. Here we try, as simply as possible, to clarify.

Together, Great Britain and Northern Ireland form the United Kingdom.

The name United Kingdom is often abbreviated to UK.

The capital of the UK is London, where the UK government and parliament reside. 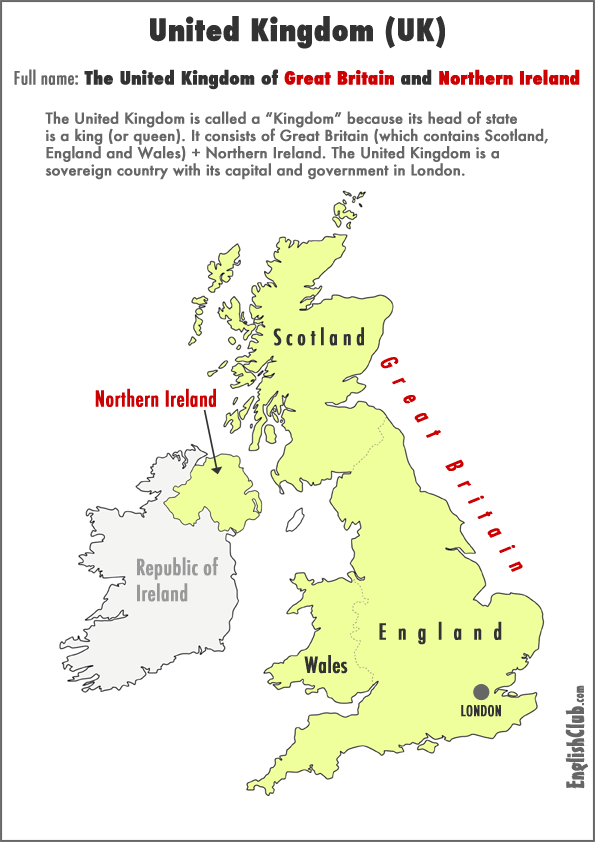 England
England shares the island of Great Britain with Scotland and Wales. It is an administrative division of the United Kingdom. Some people, including the UK government, call it a country; but it is not a sovereign country (and it does not have its own government or a seat at the United Nations).

Scotland
Scotland shares the island of Great Britain with England and Wales. Like England, it is not a sovereign country but a division of the United Kingdom.

Wales
Wales shares the island of Great Britain with England and Scotland. Like England, it is not a sovereign country but a division of the United Kingdom.

Origin and usage of UK names

Britain
Britannia was the name the Romans used for the province that they established in what is today England and Wales. Today, people mainly use Britain to refer to the whole United Kingdom.

British
Today, the adjective British means "relating to the UK". People from the UK are British citizens by nationality and have British passports. 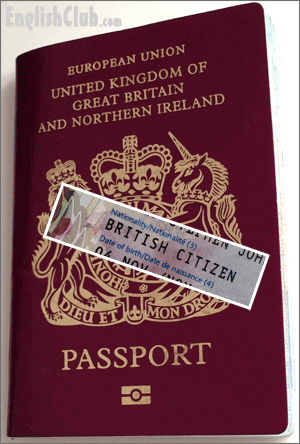 England
The name England came from Englaland [sic] (roughly modern Denmark), whose inhabitants invaded Britain in the 5th century. England is the largest of the four divisions of the UK by population and land area. People often refer to England when they mean the United Kingdom. This is an error that may cause resentment among members of the other three divisions (Scotland, Wales and Northern Ireland). A native of England is an Englishman or Englishwoman, and usually a British citizen by nationality.

English
The adjective English means "relating to England". Somebody born in England may describe himself as English but he is a "British citizen" by nationality (as are his counterparts in Scotland, Wales and Northern Ireland). As with England, people often use the term English when they really mean British.

Briton
Although the word Briton means a native or inhabitant of Britain (ie the UK), it is very formal and hardly ever used. The abbreviation "Brit", meaning the same, is very informal but may be acceptable among friends. The North American "Britisher" sounds too foreign. In fact, there is no commonly used noun for "British person".

Scotland
Scotland is a division of the UK occupying the northern part of Great Britain. The adjective Scottish (or Scots or the old-fashioned adjective Scotch) means "relating to Scotland". A native of Scotland is a Scot, a Scotsman or a Scotswoman, and usually a British citizen by nationality.

Wales
Wales is a division of the UK in the west of Great Britain. The adjective Welsh means "relating to Wales". A native of Wales is a Welshman or Welshwoman, and usually a British citizen by nationality.

See also: What is English? A short history of the origins and development of English