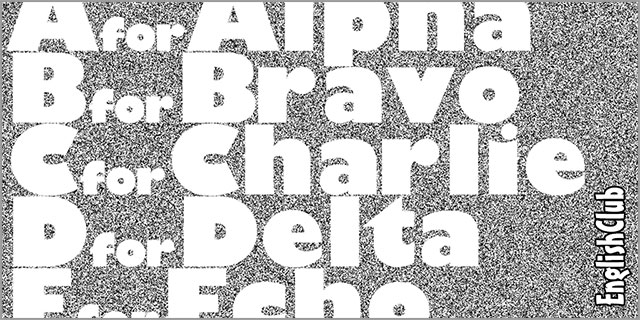 When speaking on the telephone or in noisy environments, it is sometimes useful to spell a word using the English Phonetic Spelling Alphabet. To spell "CLUB", for example, you would say: "C for Charlie, L for Lima, U for Uniform, B for Bravo."

ENGLISHCLUB - I'll spell that for you. E for Echo, N for November, G for Golf, L for Lima, I for India, S for Sierra, H for Hotel, C for Charlie, L for Lima, U for Uniform, B for Bravo

It is very easy to learn this Spelling Alphabet. Start by spelling your name, then your company or address. Soon, you will know the whole alphabet. It also helps to remember that there are several groups of words that go together: