English has become the world's international language, so if you're travelling, studying or working overseas it's the language you'll probably use when eating out. You might use it to make a booking and reserve a table, and when you arrive you might be greeted in English by the head waiter or maitre d’ before being led to your table. Then your waiter or waitress will probably bring menus in English and tell you about the day's specials and answer any questions, also most-likely in English.

A menu is a list of the food and drinks that guests can order. Menus are sometimes written on large boards for everyone to see, and sometimes they're printed on paper and handed to each guest. A simple menu like a breakfast menu or a children's menu might list just a few dishes and drinks, but lunch and dinner menus usually list many dishes. They can be à la carte dishes ordered individually, or dishes grouped together in a set menu. In European or Western-style menus, dishes are listed in a series of courses. The first course is called starters, appetizers or hors d’oeuvres, and can be a bowl of soup, a small serving of pasta, a salad or one of many savoury starters. Next is the main course or entrée, and this is usually fish, meat or poultry served with vegetables or salad or other side dishes. In many restaurants vegetarian entrées are also available these days. 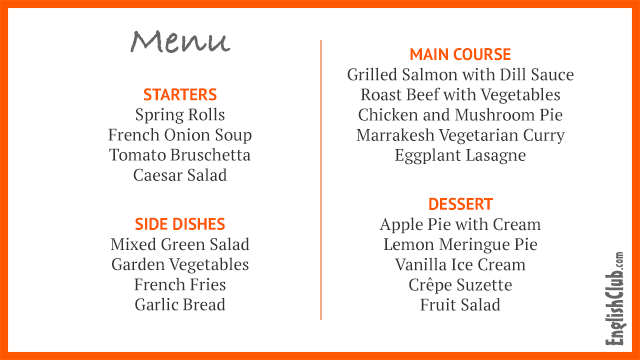 After the main course, your waiter or waitress might bring a dessert menu if you haven't already ordered desserts from the main menu. Desserts are nearly always sweet, and can be frozen like ice cream or gelato, served at room temperature like fruit salad or cakes, or served hot like pancakes, puddings and fruit pies. Dessert is sometimes followed by a cheese platter with a selection of different cheeses as well as crackers, dried fruits, nuts, etc. Guests are usually offered tea and coffee, and sometimes chocolates are also served after a meal.

Many people like to drink wine when they eat out, and higher-class restaurants often employ a wine steward or sommelier who helps guests pair wines from the wine list with the food they order. Traditionally, red wines are paired with darker meats like steak, roast beef and duck, while white wines and light reds are paired with lighter meats like chicken, fish and seafood. Many wine lists don't show the prices, so make sure you ask how much a glass or bottle costs before ordering. Famous wines can cost thousands of dollars per bottle, and you don't want to get a nasty shock when you see the bill.

When you've finished your meal and you're ready to leave, ask your waiter for the bill. In many countries a service charge of 10% to 20% of the total amount is added to the bill. This is meant to be shared among the service staff, but in North America and some Eastern European countries a service charge isn't added. In these places you should give a tip¹ of 15% to 20% directly to the waiter instead. Waiters and other staff like bartenders are usually paid very low wages, so when eating out try to tip² generously, especially in countries like the USA where a service charge isn't added to the bill.

à la carte (adjective): ordered as a separate dish; not part of a set menu - Do you have à la carte dishes as well as set menus?

appetizer (noun): a dish that's eaten before the main course - For an appetizer I'll have spring rolls, please.

bill (also US "check") (noun): the written amount you must pay for a meal and drinks - Can we have the bill, please?

café (also "coffee shop") (noun): an informal restaurant serving simple meals plus hot and cold drinks - Is there an all-night café around here?

cafeteria (also "canteen") (noun): a place that sells low-cost meals in a school or work-place, usually from a self-service counter - What's the food in the school cafeteria like?

cheese platter (noun): a selection of cheeses and crackers served on a large plate - After dessert, we had a cheese platter and some more wine.

course (noun): one part of a meal - French meals usually include three or four courses.

cuisine (noun): a country or region's style of cooking - There's more to Indian cuisine than curries, you know.

dessert (noun): sweet food eaten at the end of a meal - You love desserts, don't you?

eat out (phrasal verb): to go out to a restaurant, esp. at night - We usually eat out three or four nights a week.

fast food (noun): quickly prepared food like hamburgers and French fries - I'll get some fast food on the way home.

high-class (adjective): of high quality or high social status - We can't afford to go to those high-class restaurants.

hors d’oeuvre (noun): a savoury food served as an appetizer before the main course - Let's order some hors d'oeuvres first.

menu (noun): the list of foods and drinks served in a restaurant, café, hotel, etc. - Let's check the menu before deciding whether to eat here.

pasta (noun): Italian food made from flour and water, such as spaghetti, ravioli, lasagne, etc. - You can order any of our pasta dishes as an appetizer if you want.

pudding (noun): a soft sweet food eaten as a dessert - My grandma used to make the best chocolate pudding ever!

restaurant (noun): a place with a kitchen and dining area where people pay to eat meals - There are lots of Thai and Japanese restaurants around here.

savoury (adjective): (of food) salty or spicy rather than sweet - Most appetizers are savoury dishes.

service charge (also "service") (noun): an extra amount added to a restaurant bill that's meant to be given to staff for their service - They've already added a 20% service charge.

side dish (also "side order") (noun): an extra dish or serving that's ordered together with a main dish - I'll have the steak with a side dish of potato salad, please.

tip¹ (noun): extra money given by a guest to a waiter or other staff - If the service is great, leave a big tip.

tip² (verb): to give extra money to a waiter or other staff member for their service - Waiters don't earn much, so I always tip them.

vegetarian (adjective): of dishes or diets that don't include animal products, esp. meat - My doctor says I should switch to a vegetarian diet.

waiter (male) or waitress (female) (noun): a person who takes orders from guests and brings their food - Have you ever been a waiter?