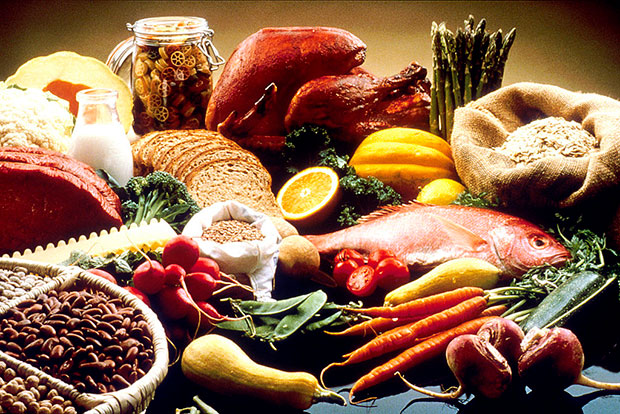 Before the development of agriculture, people got food from the plants and animals in the world around them. They dug up roots, gathered fruits and seeds, hunted and trapped animals and birds and used spears and nets to catch fish. They also collected shellfish and other seafood as well as insects and bird eggs, and in many parts of the world people still do all these things.

Around ten thousand years ago agriculture began to develop when people in the Middle East, Asia and South America began cultivating plants and domesticating animals and birds. They cultivated grasses that produced grains like rice and wheat, and grew plants that produced vegetables, nuts and beans. They also grew fruit trees and kept poultry for meat and eggs and raised animals for meat and milk, and around eight thousand years ago people also began making dairy foods like cheese and yoghurt from sheep and goat milk.

As agriculture developed, farmers began producing more and more different types of food, and now we see a huge range of foods in supermarkets. Find out much more about all these types of food by exploring the pages below:

agriculture (noun): farming, incl. growing food crops and raising animals - If you study agriculture, you'll learn about the techniques and science of farming.

cultivate (verb): to grow plants for food or other products - The British Empire cultivated opium poppies in India and sold the opium in China.

dairy food (noun): food made from milk, like butter, cheese and yoghurt - Dairy foods are a good source of protein.

domesticate (verb): to tame animals and keep them for food, work or as pets - Animals want to be free, so domesticating them can be difficult.

honey (noun): a sweet and sticky food made by bees - My kids love honey on their toast.

insects (noun): small animals with six legs such as bees, ants and flies - Our Thai friends like eating deep-fried insects.

nut (noun): a hard, dry fruit with an edible seed inside a hard shell, such as a peanut or walnut - He sat at the bar drinking beer and eating nuts.

poultry (noun): Birds that people eat, like chickens, ducks, geese, etc - Most farmers keep some poultry so they don't have to buy eggs.

raise (verb): to keep and look after animals or plants, esp. for food - We raised pigs and chickens and grew our own vegetables.

root (noun): the parts of a plant that are under the ground - Did you know that potatoes and carrots are roots?

seafood (noun): anything from the sea that can be eaten - Japanese people have always eaten lots of seafood.

seed (noun): a small hard plant part that can grow into a new plant - We planted some tomato seeds and a few months later we were eating our own tomatoes.

shellfish (noun): sea creatures with a hard shell, such as crabs, prawns mussels and oysters - Let's order a big plate of fresh shellfish to start with.