The Vocabulary of Food

with word definitions and example sentences 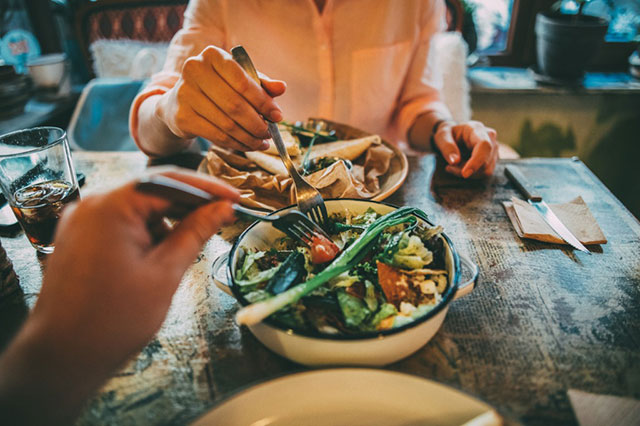 In the sections below you'll find reading materials, vocabulary lists and fun quizzes to help you learn lots of new words and phrases about food, cooking and eating out.

Foods of the World Vocabulary

Find out about the national cuisines listed below and learn vocabulary for ordering the most popular dishes in each.

appetizer (noun): food served before the main course - For our appetizers we'll have spring rolls and fish cakes, please.

bake (verb): to cook in an oven - Have you ever tried baking a cake?

course (noun): one part of a meal - French meals usually have three courses; the hors d’oeuvre, the entrée and the dessert.

cuisine (noun): a country or region's style of cooking - There's more to Italian cuisine than pizza and pasta.

cutlery (also silverware) (noun): knives, forks, and spoons used for eating - We only use our best cutlery on special occasions.

delicious (adjective): tasting very good - The food in this restaurant is really delicious.

dessert (noun): sweet food eaten at the end of a meal - Have you ever tried Middle-eastern desserts like baklava?

diet (noun): all the foods a person or animal usually eats - My doctor said a vegetarian diet rich in protein is best.

dish (noun): 1. a deep plate for cooking or serving food - I baked the pie in a special pie dish. 2. food prepared and cooked in a particular way - What's your favourite French dish?

fast food (noun): quickly served food like burgers, French fries, fried chicken, etc. - I only get fast food if I don't have time to cook.

flavour (or flavor in US spelling) (noun): the taste of food or drink - Japanese people think how food looks is as important as the flavour.

fry (verb): to cook something in hot oil or fat - Heat oil in a pan and fry the chopped onions for five minutes.

grill (verb): to cook something just above or below a heat source - Grilling a fish is better than frying it.

ingredients (noun): all the foods used to make a dish or meal - What ingredients do we need to make spaghetti sauce?

junk food (noun): foods and food products that are unhealthy because of all the fat, salt or sugar they contain - People who love junk food soon get fat and unhealthy.

kitchenware (noun): things used for preparing food like knives, spoons, pots, dishes, etc. - Our kitchen cupboards are full of kitchenware we hardly ever use.

menu (noun): the list of foods and drinks served in a restaurant, café, pub, etc. - Let's check the menu before deciding whether to eat here.

nutritious (adjective): having nourishing substances we need in order to be healthy - Thai food's nutritious as well as being delicious.

recipe (noun): instructions for cooking a dish or a meal - My mum has a great recipe for chocolate pudding.

seafood (noun): anything from the sea that can be eaten - If you eat vegetarian food plus fish and seafood, but not meat or poultry, you're a pescatarian/pescetarian.

tableware (noun): things used for serving or eating a meal such as knives, forks, plates, glasses, etc. - Most of our wedding gifts were tableware of one sort or another.

tasteless (adjective): having very little flavour - Vegetarian food can be a bit tasteless, but it can also be really delicious.