Words starting with mono- and poly- 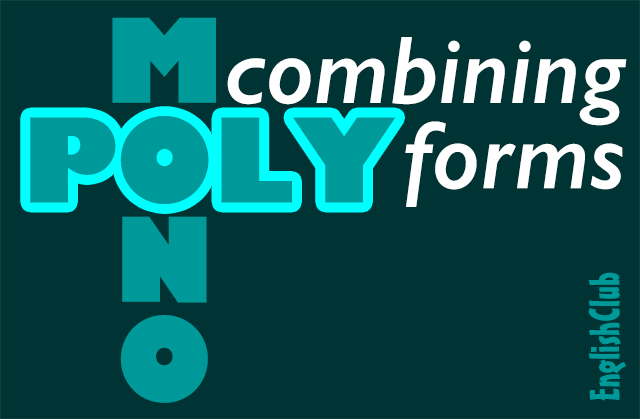 The elements mono- and poly- are combining forms taken from Greek.

By definition, mono- specifies the quantity (one); but poly- does not specify the quantity—it simply says "more than one" or "much/many". Poly- could be two; it could be a million.

Below are select alphabetical lists of the most common English words that start with mono- and poly-. Each entry has:

monocle (noun): a single eyeglass, worn on one eye. [Contrast with spectacles: a pair of glasses.]
He wears a monocle in his right eye.

monodrama (noun): a theatrical play or drama for one performer only.
"The Trap" is a new one-act monodrama about a young woman in her bedroom browsing social media.

monogamy (noun): the practice of being married to only one person at a time. [Contrast with polygamy.]
In many countries monogamy is the traditional form of marriage.

monoglot (noun): a person who speaks only one language. monoglot (adjective). [Contrast with polyglot.]
I don't suppose there are many monoglots in Switzerland; it's got four national languages and English is compulsory in school.

monolingual (adjective): able to speak only one language.
It used to be that England was almost entirely monolingual, but recently more and more people are learning a foreign language.

monolith (noun): made from a single block of stone. monolithic (adjective).
While the Pyramids are assembled from gigantic blocks of stone, the Great Sphinx of Gaza is a monolith carved in a single piece from the bedrock.
The country's army is not a monolith and its military leadership is often divided in opinion.

monologue (noun): a long speech by one actor in a movie or play; a long, boring speech by one person in a conversation. [Contrast with dialogue.]
The play ends with a very funny monologue by the main character ridiculing all the others.
It didn't matter what I tried to say, she just went on and on with her boring old monologue all about herself.

monophthong (noun): a sound made with a single vowel; also called a pure vowel. [Contrast with diphthong: sound made with two vowels in a single syllable.]
Of the twenty vowel sounds in the Phonemic Chart, twelve are monophthongs and eight are diphthongs.

monopod (noun): a one-legged stand for a camera or fishing-rod. [Contrast with tripod: three-legged stand.]
Photographers who travel a lot often prefer to take a monopod with them as it gives almost as much support as a tripod and yet is far lighter.

monopoly (noun): total ownership or control of something by a single person or entity. Monopoly (name): popular board game in which each player tries to get control of the whole board. monopolize (verb): have or take total ownership or control of something.
It could be said that the Internet and blogging is challenging the cosy monopoly on the distribution of news that professional journalists have enjoyed for decades.
Throughout much of the 1930s Hitler increased his monopoly on power ending ultimately in dictatorship.

People are sometimes surprised to see "mono" and "poly" in the same word (monopoly) because they appear to contradict each other. But in the case of monopoly, the mono- is a true combining form whereas the "poly" is from the Greek word for sell (hence the meaning "single sell" or "sale by single person").

monorail (noun): a railway with a single rail.
Most monorail trains sit on top of the single rail but some hang from it instead.

monosyllabic (adjective): of a word—consisting of only one syllable; of a person—speaking in monosyllables. monosyllable (noun): a word that consists of one syllable only. [Contrast with polysyllabic.]
The police questioned the prisoner for hours, but he gave only occasional monosyllabic answers, mostly "yes" and "no".

monotheism (noun): the belief that there is only one god. monotheist (noun/adjective). [Contrast with polytheism.]
Other than Judaism, Christianity and Islam, which share a common tradition of monotheism, most religions are polytheistic.

monotone (noun): a constant sound (usually words) with the same single constant tone. monotonous (adjective): repetitious and boring, with no interest or variety.
Then our teacher reads out our homework results in his usual boring monotone.
The only sound was the monotonous hum of the car engine as we drove across the great plain.

polyandry (noun): polygamy in which a woman has more than one husband. polyandrous (adjective). [Compare with polygyny.]
People often assume that polygamy means one man having several wives, but in one form of polygamy—polyandry—one woman has several husbands.

polyclinic (noun): a clinic or hospital that treats various types of disease.
Since the closure of the polyclinic, and if the local doctor can't help, the townspeople have to travel two hours to the nearest main hospital in the provincial capital.

polyethnic (adjective): formed of various ethnic groups.
The classical empires such as those of the Assyrians or Romans were by their nature highly polyethnic constructions.

polygamy (noun): the practice of being married to more than one wife or husband at the same time. [Contrast with monogamy. See also polyandry, polygyny.]
Many people are surprised to learn that polygamy can refer to a woman having more than one husband and not just vice-versa.

polygon (noun): a flat shape with three or more (typically more than five) straight sides and angles. polygonal (adjective).
While technically speaking both triangles and squares are both polygons, the term is normally reserved for shapes with five or more sides.

polygraph (noun): a machine that can make multiple physiological measurements in a person, usually used to detect whether somebody is telling the truth or not; a lie detector; a lie-detector test.
If you are accused of a crime in the USA, you may be required to take a polygraph test to see if you are lying or not.

polygyny (noun): polygamy in which a man has more than one wife. polygynous (adjective). [Compare with polyandry.]
It's safe to say that there are more polygynous marriages than there are polyandrous ones.

polyhedron (noun): a solid shape with many flat faces, typically more than six. polyhedral, polyhedric (adjective).
The Pyramids in Egypt are probably the most famous polyhedrons in the world.

polymath (noun): a person of great knowledge or learning.
Leonardo da Vinci, painter of the famous Mona Lisa, was actually a polymath who studied the laws of science and nature widely, allowing him to work as a painter, sculptor, architect, inventor, draftsman and military engineer.

Polynesia (name): a region in the Pacific Ocean (roughly between Hawaii, New Zealand and Easter Island) containing many islands. Polynesian (noun): a person from Polynesia. Polynesian (adjective): relating to Polynesia.
They spent five idyllic years in Polynesia, passing their time sailing between the many islands.