This page looks at the vocabulary of Documentary Films through their history, people and styles. (Words in bold are listed in Wordchecker below.) 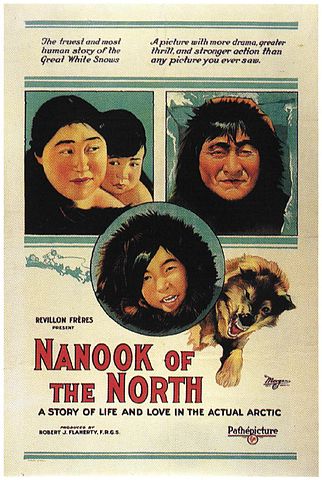 If you like learning about the real world and real people, you probably like watching documentaries. Some documentaries are feature films shown in cinemas, and some are made for television. Television documentaries are often made as a series, and many of the most popular are wildlife documentaries like the BBC's The Life of Mammals. Some of the most popular feature film documentaries are also about wildlife, including 2001's Winged Migration and the box office hit March of the Penguins in which we follow a colony of emperor penguins on their long journey across Antarctica. Educational documentaries like these usually include voice-overs in which we hear a narrator telling us about the things we're seeing. They can also include title screens on which information is written or a host who appears on-screen and talks to us directly.

Picture top right: Poster for one of the first documentary films ever made, 1922’s Nanook of the North (Public Domain)

One of the most successful documentary filmmakers is Michael Moore who often acts as the host in his own films. His political documentary Fahrenheit 9/11 was so successful that it broke box office records and won top prize at the 2004 Cannes Film Festival. The film reveals how US President George W Bush used the 9/11 terrorist attacks as an excuse to start wars in Iraq and Afghanistan that made huge profits for companies linked to his own political party.

A documentary like Fahrenheit 9/11 that reveals hidden truths is called an exposé. Other exposés include Taxi to the Dark Side about the US military's terrible treatment of its prisoners, and the multi-award-winning film No End in Sight about all the mistakes made during and after the 2003 invasion of Iraq. Another recent war documentary is 2010's Restrepo, an observational documentary made by photojournalists who spent a year living with US soldiers in Afghanistan. An observational documentary makes us feel as if we're in a place observing things for ourselves, and one of the earliest was the 1922 silent film Nanook of the North in which we see the daily lives of Inuit people in Canada's Arctic north.

Even though Nanook of the North is about people who lived a long time ago, it isn't what we'd call an historical documentary. These are films that use archival footage and interviews with witnesses and historians to explain events in history. Examples include 1974's Hearts and Minds about the Vietnam War and 2002's The Pinochet Case about the destruction of democracy in Chile. If you're interested in history, you can find more films like these in the list of recommended documentaries below. If you're interested in Asian history, for example, check the list of documentaries about Asia. You'll find films like Burma VJ and The Act of Killing in which you'll see mass killings in Indonesia in the 1960s re-enacted in some of the scariest scenes ever filmed for a documentary.

If you check the list you'll also find science-related documentaries like 1989's For All Mankind about the Apollo moon missions and 2006's An Inconvenient Truth about man-made climate change. Health-related documentaries include Michael Moore's Sicko, an exposé of the American healthcare system, and Morgan Spurlock's Super Size Me in which he documents the unhealthy effects of living on a diet of junk food for a month. Documentaries about economic issues include the 2010 Academy Award-winning film Inside Job about greedy bankers who caused an economic collapse in 2008 in which millions of people lost their jobs, their homes and their life savings.

You can also find films about crime like Bus 174 in which live television footage is used to tell the story of a young man who held up a bus in Rio de Janeiro, and Into The Abyss in which acclaimed German director Werner Herzog explores all aspects of a multiple murder by getting to know the murderers, the victims' families, and the detectives who solved the crime.

Video: Trailer for Werner Herzog’s true-crime documentary Into the Abyss

Documentaries on injustice include Paradise Lost and Murder on a Sunday Morning, an Academy Award-winning film about a 15-year-old boy who was sent to trial for a murder he didn't commit. Films that try to persuade us of the importance of issues like injustice are called expository documentaries. They've addressed many issues like homelessness (2000's Dark Days), gun control (2002's Bowling for Columbine), pollution (2009's Crude), bullying (2012's Bully), unemployment (2014's The Overnighters) and the use of religion to attack gay people (2007's For the Bible Tells Me So and 2013's God Loves Uganda).

Not all documentaries are about serious issues like these, however. If you're interested in sports you can find inspiring films like Hoop Dreams about a pair of teenage basketballers who dream of becoming professional players, and the Academy Award-winning film Undefeated about a high school football team's struggle to win a championship. You can also find films about boxing (1996's When We Were Kings), car racing (2010's Senna) and mountain climbing (2015's Meru).

Interesting films about the arts include Paris Is Burning, an award-winning documentary about gay and transgender people who invented an exciting new style of dancing in the 1980s, and the biographical documentary Jean-Michel Basquiat: The Radiant Child that chronicles the short life of an African-American graffiti artist whose paintings now sell for million of dollars. Music documentaries include concert films like Monterey Pop and Woodstock, biographical films like the Amy Winehouse documentary Amy, and films in which musicians talk about their lives and their music like the Nick Cave documentary 20,000 Days on Earth.

Video: Trailer for 20,000 Days on Earth, a film in which musician Nick Cave talks about his life and work

Documentaries about other interesting people include the 2009 Academy Award-winning film Man On Wire about French tightrope walker Philippe Petit and his incredibly dangerous high-wire walk far above the streets of New York, and Werner Herzog's documentary Grizzly Man about a man who spent years among the wild bears of Alaska before being eaten alive in 2003.

Herzog also made the experimental documentary Lessons of Darkness in which we see strangely beautiful footage of Kuwait's burning oil fields after the first Gulf War in 1990. Koyaanisqatsi: Life Out Of Balance is another experimental documentary in which we see amazing slow motion and time-lapse footage of both the natural world and the man-made world. Unlike most documentaries, Koyaanisqatsi has no voice-over narration, no interviews, and no host explaining what the film's about. The only clues are on a title screen at the very end that shows translations of Hopi songs that composer Philip Glass used in what's widely-regarded as one of the finest musical scores ever written for a documentary.

chronicle (verb): to make a record of a series of events - The film chronicles the events that led to World War One.

document (verb): to record something on film or in writing - We should document our trip and make a movie about it.

exposé (noun): a report or a film that reveals hidden facts - You should do an exposé on companies that avoid paying tax.

feature film (noun): a full-length film made for release in cinemas - Most feature films are between 80 and 140 minutes long.

host (noun): a presenter who appears on-screen during a film or TV show - David Attenborough's the host in lots of wildlife documentaries.

interview (noun): a meeting in which one person asks another person questions - I enjoy watching interviews where journalists are on location with their guests rather than in the studio.

narrator (noun): a person who does voice-overs for films or TV shows - Why don't you get Morgan Freeman to be the narrator?

re-enact (verb): to recreate a past event by acting, wearing costumes, etc - We saw an American Civil War battle re-enacted at Gettysburg.

slow motion (also "slo-mo") (noun): a film technique that slows down movement on screen - The birds are shown in slow motion.

time-lapse (adjective): of a film technique that speeds up movement on screen - Check out the time-lapse shots of traffic from above.

title screen (noun): written information on screen for viewers to read - Did you read everything on the title screen before it disappeared?

voice-over (noun): recorded words heard during a film or TV show - Have you recorded the voice-overs yet?