This page looks at the vocabulary of Historical Drama Movies through their history, people and styles. (Words in bold are listed in Wordchecker below.) 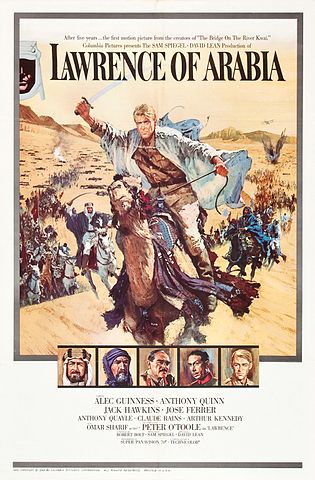 A popular subgenre of the historical drama is the epic. An epic is a spectacular movie that tells a long and complicated story about important historical events. Many epics have been made about the ancient worlds of Egypt and Greece and the ancient empires of Rome and China. Famous epics include 1960's Spartacus about a slave uprising against the Roman Empire, the Academy Award-winning film Gladiator about a Roman general who's captured by slave traders, and the 2008 epic Mongol about Genghis Khan's rise to power in the Mongol Empire.

Until the 1960s, most American historical dramas were Westerns about European colonization of the western regions of North America in the nineteenth century. These areas belonged to indigenous Native Americans or were in Mexican states like California, Arizona and Texas. In early Westerns, Native Americans were portrayed as "savages" and Mexicans were portrayed as villains, while the Europeans who were trying to take their land were portrayed as brave heroes or victims of these savages and villains. Movies like this include Fort Apache, Red River and The Searchers—a classic Western about a group of people who are searching for a European girl who's been kidnapped by Native Americans.

Westerns that were set later in the nineteenth century were often about law and order instead of colonization. Most Native Americans had already been killed or forced to live on reservations, and Mexicans had already lost their states during the 1846 Mexican-American War, so the villains in these films were usually outlaws or greedy landowners and businessmen instead, and the heroes were sheriffs or brave gunmen. Westerns of this type include Shane, Rio Bravo, The Man Who Shot Liberty Valance and the suspense-filled classic High Noon. A Western that doesn't follow this formula is the 1943 classic The Ox-Bow Incident in which an angry mob of townspeople kill three cowboys they mistakenly blame for a murder.

During the 60s, many Westerns were made by Italian directors. Italian Westerns, also called Spaghetti Westerns, were popular worldwide thanks to their powerful stories, their visual style and their beautiful music. Director Sergio Leone made several highly-acclaimed Westerns like A Fistful of Dollars, The Good, the Bad and the Ugly and Once Upon A Time In The West. Sergio Corbucci also made highly-rated Spaghetti Westerns like Django, The Mercenary and The Great Silence, a dark and violent film with a score by the acclaimed Italian composer Ennio Morricone. Morricone also wrote scores for dozens of other movies, including most of Sergio Leone's films, and he's now regarded as one of cinema's greatest composers.

Since the 60s, most Westerns have been revisionist Westerns in which Native Americans and Mexicans are no longer portrayed as savages or villains. The most popular of these include 1970's Little Big Man about a 118-year-old white man who lived most of his life as a Native American, and 1990's Dances with Wolves about a former soldier who marries a Native American woman. Many remakes of earlier Westerns have also been made like Clint Eastwood's Unforgiven, James Mangold's 3:10 To Yuma and the Coen brothers' True Grit. Other recent Westerns include 2010's Meek's Cutoff about a small group of European settlers travelling across Oregon in 1864, and Quentin Tarantino's Django Unchained which mixes elements of the Spaghetti Western with other genres like black comedy and the road movie.

Many Westerns were based on historical Japanese action dramas called samurai films. In Japanese history, samurai warriors were highly-skilled swordsmen who worked as soldiers or bodyguards for wealthy warlords. Some of the most highly-acclaimed samurai films are Akira Kurosawa's Seven Samurai on which the American Western The Magnificent Seven was based, and Yojimbo on which Sergio Leone's A Fistful of Dollars was based. Many samurai films are now regarded as being among the finest historical dramas ever made, and other classics include Kurosawa's Rashomon and several movies by Masaki Kobayashi such as Harakiri and Samurai Rebellion.

Kobayashi also made a nine-hour film released in three parts called The Human Condition based on his own terrible experiences during the Second World War. While action movies often glorify war and portray it as an exciting adventure, realistic dramas like The Human Condition show the shocking truth about war. Historical dramas like this are often called anti-war films, and others include the Australian World War One drama Gallipoli and a film set during the 1937 Nanking massacre in China called City of Life and Death. Similar films set during the Vietnam War include Stanley Kubrick's Full Metal Jacket and Oliver Stone's Platoon, while films set during more recent wars include the Israeli anti-war drama Lebanon and the American film Battle for Haditha, a docudrama about the massacre of 24 Iraqi men, women and children by American soldiers on November 19, 2005.

Historical dramas have also been made about revolutions and uprisings like 1983's Danton about the French Revolution, Ken Loach's Land and Freedom about a fascist uprising that led to the Spanish Civil War, and Steven Soderbergh's exciting two-part biopic Che about the Cuban Revolution. Italian director Gillo Pontecorvo's powerful historical dramas Queimada and The Battle of Algiers are also about uprisings. Queimada, also known as Burn! and starring Marlon Brando, is about a slave uprising in a Portuguese colony in Central America, while The Battle of Algiers is based on the brutal repression of a 1956 uprising in the French colony of Algeria. The highly-acclaimed 2001 French docudrama Rebellion is about similar events on the French colony of New Caledonia in 1988. Movies have also been made about Scottish uprisings against England like Mel Gibson's Braveheart and Irish uprisings against British control like 2002's Bloody Sunday and 2007's The Wind That Shakes the Barley, while highly-rated films about workers going on strike include Matewan about the 1920 US coal miners' strike and Comrades about striking British farm workers in the 1830s.

Matewan and Comrades are based on true stories, and films like this can be called historical docudramas. Others include Steven Spielberg's Schindler's List about how a German businessman saved hundreds of Jewish lives in Nazi Germany, Clint Eastwood's Invictus about how Nelson Mandela helped the South African rugby team win the 1995 Rugby World Cup, and 2014's Selma about the brutal repression of a peaceful civil rights march in the US city of Selma in 1965. Many biopics based on the lives of famous people in history have also been made. Two of the most highly-acclaimed are David Lean's Lawrence of Arabia about the British spy T.E. Lawrence who helped Arabs in their uprising against Turkish rule during World War One, and Richard Attenborough's Gandhi about the man whose non-violent uprising led India to freedom in 1947 after nearly 200 years of repressive British rule.

Video: Scene from the 1982 historical biopic Gandhi in which Gandhi is thrown off a train in South Africa for travelling in a first-class compartment meant for white Europeans only.

Not all historical dramas are about famous people and events, however. Some are about the everyday lives of ordinary people in the past. In Mel Gibson's Apocalypto we see what life was like in the Mayan civilization of Central America before Spanish colonization, and in Rolf de Heer's Ten Canoes we see how indigenous Australians lived before their country was colonized by the British, while in a series of three films called The Apu Trilogy by Indian director Satyajit Ray we see what life was like in a poor Indian village in the 1910s.

Watching films like these is a great way to learn about life in the past, and you will find many more highly-rated historical dramas in the list below.

ancient (adjective): very old or from a very long time ago - We're studying the ancient civilizations of India this week.

anti-war film (noun): a film that shows how terrible war really is - Mum made us watch some anti-war films after she caught us playing war games.

civil rights (noun): freedom and equality for all races, genders, classes, etc - They were attacked during a civil rights march.

colonize (verb): to take control of a foreign land and live there - They colonized our land, made us slaves, and stole everything we had.

empire (noun): a large group of foreign lands colonized by one country - The loss of the Thirteen Colonies was a big blow to the British Empire.

epic (noun): a long and spectacular film about famous events in history - Some epics are great, but others are just long and boring.

glorify (verb): to make something seem great while hiding its bad side - We don't let our kids watch movies that glorify violence.

massacre (noun): the brutal killing of many people - Genghis Khan was responsible for many massacres.

monarch (noun): royal head of state, like a king, queen, emperor, etc - How many monarchs are there in Europe?

outlaw (noun): someone who breaks the law - In those old Westerns, the outlaws were the guys in black hats.

portray (verb): to show something in a particular way - Why did they portray women as being so weak and afraid all the time?

remake (noun): a new version of an existing movie - She likes the original French movie better than the American remake.

repression (noun): the use of violence or force to control people - Brutal repression by soldiers still didn't stop the protests.

reservation (noun): an area Native Americans were restricted to - They were forced to live on reservations far from home.

revolution (noun): a successful uprising that forms a new political system - The French Revolution was too violent, so it didn't end well.

samurai film (noun): a Japanese drama about samurai warriors - My cousin's a huge fan of those old samurai films.

savage (noun): a cruel, violent and uncivilized person - Why did they call Native Americans "savages" in those old movies?

score (noun): music written for a film - Who's composing the score for your next film?

sheriff (noun): the most senior police officer in a US town - The sheriff gets the outlaw in the end, of course.

uprising (noun): an attempt to bring down a government - There wouldn't have been an uprising if they'd treated everyone better.

Western (noun): a cowboy movie about the old American West - I used to have an old cowboy hat that I wore while watching Westerns on TV.