This page looks at the vocabulary of Country Music through its history, people and songs. For other genres see Popular Music Genres. 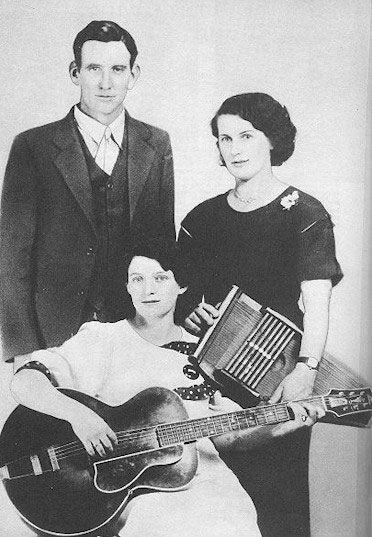 Country music was one of the first genres of modern American popular music, and old-time music was its earliest style. It developed in the southeastern states of the USA as a mix of folk music from the British Isles, church music and African American blues. It was played on instruments like acoustic guitar, mandolin, autoharp, fiddle and the banjo. Old-time music was first recorded in the 1920s, with recordings of the Carter Family becoming the most popular. A. P. Carter collected folk songs and also wrote new songs, and he sang them in harmony with his guitar-playing sister-in-law Maybelle and his wife Sarah, who also played autoharp. Songs like Can The Circle Be Unbroken (By and By) and Wildwood Flower became hit records, and the Carter Family became the first stars of country music.

Jimmie Rodgers, another of country music's earliest stars, was recorded at the same recording sessions as the Carters. Jimmie was taught how to play guitar and sing blues and work chants by African Americans in railroad gangs in which he worked. He also heard old-time music and folk songs and combined all these styles in his own songs. He often used a vocal technique called yodelling, and his first hit record, Blue Yodel, sold nearly half a million copies in 1927.

Before television, American families often sat together and listened to the radio. One of the most popular programs was a live country-music variety show called the "Grand Ole Opry". It was broadcast from Nashville, Tennessee, which had become the centre of the country-music business. Listeners heard old-time music as well as another style called Western music. This style often had horse-like clip-clop rhythms and songs about lovesick cowboys and gun-fighting outlaws. Western music became popular in the 1930s and 40s when singing cowboys began appearing in Hollywood cowboy movies called "Westerns". Singing cowboys like Gene Autry and Roy Rogers became huge country-music stars, and Nashville executives decided the cowboy image was better for country music than the hillbilly image of old-time music. They renamed the genre "Country and Western music" and began dressing their musicians in cowboy clothes. 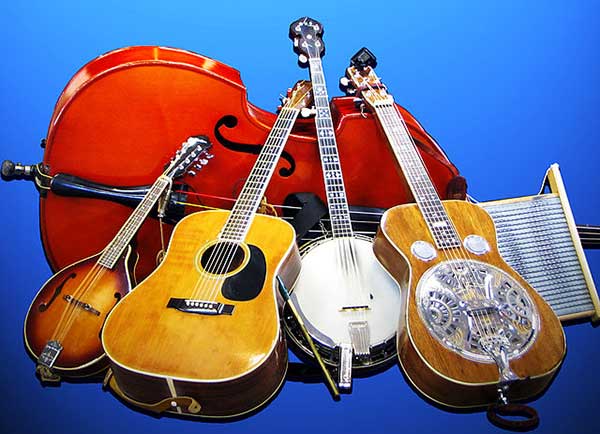 Meanwhile, a style of Western dance music called Western swing became popular in Texas, Oklahoma and California. Western swing bands used amplified instruments like pedal steel guitar to create music loud enough to be heard in large dance halls. Their music was a lively mix of Western country music and swing jazz, and one of the most popular bands was Bob Wills and The Texas Playboys. Another style called rockabilly developed when Western swing bands began playing R&B songs as well as country songs. When singers like Elvis Presley heard this new mix of country music and R&B, they formed rockabilly bands with acoustic guitar, electric guitar, stand-up bass and drums. Elvis had several rockabilly hits early in his career, as did Carl Perkins, Roy Orbison and Johnny Cash. Cash became one of country music's biggest artists in the 60s when he combined the sounds of rockabilly with those of honky tonk. He soon became known as the "man in black" because he wore black clothes instead of cowboy clothes, as did Roy Orbison who wore dark sunglasses as well to complete his look.

Honky tonk first developed in the 1940s in working-class honky tonk bars near the oil fields of Texas. Honky tonk bands usually included acoustic and pedal steel guitars, fiddle, stand-up bass and drums, and the songs were often about loneliness, love, heartbreak and pain. Working-class people could relate to these songs, especially those of country music's greatest singer-songwriter Hank Williams. Hank drank too much, had a difficult relationship with his wife Audrey, and died young at 29. But in his short, troubled life he wrote hundreds of beautiful and powerful songs, many of which have become country-music standards like Lovesick Blues, Cold Cold Heart and I'm So Lonesome I Could Cry.

Video: Hank Williams singing I'm So Lonesome I Could Cry, written and recorded in 1949

Other important honky tonk artists include Ernest Tubb, Lefty Frizzell and Jean Shepard. When mainstream country music has become too sweet and commercial, younger musicians have often looked to honky tonk for inspiration when seeking a more honest and authentic new style of their own.

Another style called bluegrass began in the 40s when Bill Monroe and the Blue Grass Boys led a revival of old-time country music. It featured stringed instruments like guitar, banjo, mandolin, fiddle and bass, and vocals were usually sung in two, three or four part harmony. Bluegrass was revived in the 70s by folk rock bands like the Nitty Gritty Dirt Band, and again more recently after the soundtrack album from the movie O Brother, Where Art Thou? topped the US album charts in 2001.

In the mid-1950s, record companies in Nashville were losing sales to chart-topping rock & roll artists like Little Richard and Elvis Presley. To compete, Nashville producers like Chet Atkins created a new style aimed at white adults who rarely bought country music. They recorded sweet ballads with orchestral strings and choirs instead of traditional country instruments like fiddle, guitar and banjo, and the plan worked. Before long singers like Jim Reeves, Patsy Cline, George Jones and Tammy Wynette were topping the charts and Nashville was making money again.

Country Music from 1960 to Now

Many country artists in the 1960s didn't like what Nashville had done to country music, and this led to new styles like the Bakersfield sound and outlaw country. In Bakersfield, California, artists like Buck Owens and Merle Haggard led an electric guitar-driven revival of honky tonk, while Nashville artists like Waylon Jennings, Willie Nelson, Kris Kristofferson and Johnny Cash added the progressive themes of folk music and the rebellious attitude of rockabilly to the mix to create the outlaw country sound. In later years these four artists recorded and toured together as The Highwaymen.

In the mid-60s a new style called country rock began to develop when musicians like Gram Parsons, Bob Dylan and Neil Young began adding elements of country music to their folk rock sound. After Parsons joined chart-topping rock band the Byrds in 1968, they released Sweetheart of the Rodeo, one of country rock's greatest albums. Bob Dylan also began mixing elements of country music into his folk rock sound in the mid-60s. Dylan had been writing poetic folk songs since the early 60s, especially protest songs like Blowin' in the Wind and A Hard Rain's a-Gonna Fall. When he switched from acoustic to electric guitar in 1965, his sound moved closer to rock. Then in 1969 he returned to country music and recorded Nashville Skyline with some of the city's finest musicians. In the 70s and beyond he continued to produce country rock, as did artists like Gene Clark, Neil Young, Emmylou Harris and Linda Ronstadt.

Another style that appeared in the 60s and continued into the 70s and beyond is country pop in which the story-telling lyrics and lilting sounds of country music are combined with the catchy melodies of pop. While the genre has produced a lot of second-rate music, it has also produced many fine songs by highly-talented artists like Bobbie Gentry, Glen Campbell, Kris Kristofferson, Kenny Rogers and Dolly Parton.

Throughout this period Nashville was producing a lot of smooth, easy-listening country music that many artists and fans felt was dull and overly-commercial, and a backlash began. It started in the 80s when artists like George Strait, Randy Travis and Dwight Yoakam revived the more authentic sounds and themes of honky tonk and outlaw country to create a style called "new traditionalist". At the same time alternative rock bands like Cowboy Junkies and REM began adding mandolin and other country instruments to their sound. Interest in country music soon spread within the alternative rock scene, and before long a new style of country rock called "alt-country" developed, with bands like Uncle Tupelo, Wilco and Son Volt leading the way.

Since 2000, country music has reflected the politically-divided state of the USA as a whole. Two main camps emerged, one reflecting more conservative values and the other reflecting more progressive liberal values. The conservative side produced "bro-country" aimed at white men who tended to oppose gun-control, feminism and minority rights. On the progressive side americana emerged as a mixture of traditional country music with working-class folk music, attracting artists like Steve Earle and Rhiannon Giddens. Since 2015, award-winning artists like Miranda Lambert, Chris Stapleton, The Chicks and Brandi Carlile have also been expressing more progressive views within a wide range of contemporary country styles.

Video: At the Purchaser's Option by Rhiannon Giddens. This song is a good example of the genre known as americana.

acoustic (adjective): without inbuilt electrical equipment to amplify the sound - I can play acoustic guitar, but I can't play electric guitar.

amplify (verb): to make sounds louder, esp. by using electrical equipment - If we don't amplify the drums, they'll be hard to hear.

authentic (adjective): real or genuine - You can still see an authentic Chinese opera in Beijing.

autoharp (noun): a small harp with buttons to press for playing chords - Is the autoharp used much in bluegrass music?

banjo (noun): an African American stringed instrument based on the African kora - Do you play four-string or five-string banjo?

bluegrass (noun): a style of country music based on old-time Appalachian music - We're going to a bluegrass concert tonight.

commercial (adjective): made in order to be popular and make money - Garth's country music is much too commercial for me.

country pop (noun): a style that mixes pop and country music - Country pop is really popular in America these days.

country rock (noun): a style that mixes rock and country music - My brother doesn't like country pop, but he loves country rock.

fiddle (noun): another word for "violin", esp. in country and folk music - Who's playing fiddle on that record?

folk rock (noun): a style that mixes folk and rock music - We heard lots of folk rock bands in San Francisco in the early 60's.

mandolin (noun): a stringed instrument like a guitar with a curved back - You can hear mandolin on those early old-time recordings.

outlaw country (noun): a style of country music popular in the 1960s - Most outlaw country singers wore black clothes instead of cowboy clothes.

revival (noun): the return to popularity of an old style or form - There was a rockabilly revival during the punk music years.

standard (noun): a song that is often recorded and performed - Lots of Roy Orbison's songs have become pop standards.

Western (country) music (noun): a style of country music that developed in the western states of the USA - My dad likes Western music more than old-time country music.

Western swing (noun): a style that mixes Western music and big-band swing jazz - Those Western swing records are great to dance to.

yodel (verb): to sing in a way that quickly changes from a very high voice to a normal voice - When I tried to yodel, everyone laughed.