This page looks at the vocabulary of Hip Hop Music through its history, people and songs. For other genres see Popular Music Genres. 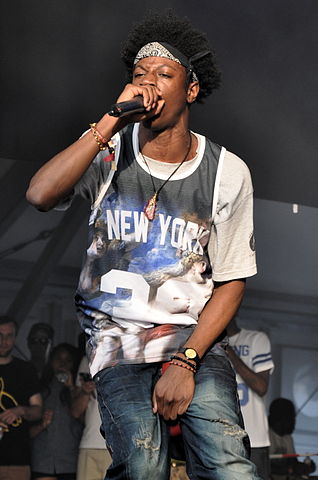 When hip hop music first developed in the late 1970s, not many people knew about it. It was created in the poorest districts of New York City by African American and Latino teenagers as part of a hip hop scene that also produced breakdancing and graffiti art. Many of these young people were unemployed, but some found work as DJs in discos where they learned deejaying techniques like how to use two turntables and a DJ mixer to play records non-stop. Sometimes they'd also deejay at free block parties in their neighbourhoods where they'd play funk and disco tracks non-stop and ask a friend to act as their MC. The MC would introduce the DJ and encourage everyone to dance and have a good time. Some MCs tried to be more entertaining by talking in time to the beat of the music and using rhymes, and by doing this they invented rapping.

As rapping became more popular, more DJ and MC duos formed. As the competition grew, DJs began improving their beats by using techniques like sampling short drum breaks and scratching. MCs also began improving their raps by using more complex rhymes and by developing flow, or the ability to rap with a good sense of rhythm and a natural flowing style. Hip hop music was only performed live at first, but in 1979 a hip hop single called Rapper's Delight by The Sugarhill Gang was released, and to everyone's surprise it became a top-ten hit worldwide.

After the success of Rapper's Delight, many other hip hop records were released like Kurtis Blow's The Breaks and Afrika Bambaataa's Planet Rock. Most of these songs were about having fun, but in 1982 Grandmaster Flash and the Furious Five released The Message, an early example of socially-conscious hip hop. It had a slow funk groove with melodic synthesizer riffs and the raps were about social issues like poverty, crime and the stress of living in a dangerous city.

Video: The Message by Grandmaster Flash and The Furious Five

By the late 80s, many hip hop beats were being made in a studio with drum machines, synthesizers and samples from old funk and disco records. In 1987, New York duo Eric B. & Rakim released Paid In Full, one of hip hop's finest albums on which Rakim raps over Eric's sample-heavy beats. In the late 80s, a new style of political hip hop developed when groups like Public Enemy began demanding political change and an end to injustice and racism.

In the early 90s, producers began using audio editing software and digital effects to create new styles of alternative hip hop such as jazz rap in which groups like De La Soul and A Tribe Called Quest added jazz and R&B samples to their beats. The Fugees used elements of reggae and soul to create their own new style, and all-girl group Salt-N-Pepa created a fun new style of hip hop pop. Later in the 90s, rappers like Common, Mos Def and Talib Kweli created a new style of socially-conscious hip hop when they began rapping about political and social issues over breakbeat grooves played by jazz and funk musicians. Common's album Like Water for Chocolate and Mos and Talib's album Black Star are fine examples of this style.

The most successful styles of the 90s were the hardcore rap of New York and the gangsta rap and G-Funk of Los Angeles. New York's Wu-Tang Clan created one of the first hardcore styles when they rapped about gangster life over swinging hip hop beats with samples from martial-arts movies. In 1994 a young rapper named Nas released his first album Illmatic. Its loose mid-tempo beats, jazzy samples and Nas' poetic rapping made Illmatic one of hip hop's greatest albums. Other popular hardcore rappers include Puff Daddy, The Notorious B.I.G., Jay-Z and 50 Cent.

Video: The World Is Yours by Nas from his classic 1994 album Illmatic

Los Angeles' gangsta rap developed from the rap music of artists like Ice-T and NWA. Ice-T began by sampling funk rhythms and rapping about the dangers of drugs, crime and dropping out of school in tracks like 1990s You Played Yourself. The members of NWA were from Compton, one of LA's poorest and most violent districts, and they rapped about the injustice and police violence in their neighbourhood. Their angry raps included a lot of explicit language, and the media attention this created helped their albums reach the top of the charts. Former NWA member Ice Cube released his classic gangsta album Death Certificate in 1991, and Tupac Shakur, or 2Pac, released his own classic album All Eyez on Me before being killed in 1996.

When Dr Dre, another former NWA member, released his album The Chronic in 1991, G-Funk was heard for the first time. G-Funk producers often sampled funk grooves by George Clinton's P-Funk groups Parliament and Funkadelic and slowed them down to create relaxed beats with funky bass lines, electronic effects and female backing vocals. G-Funk rappers also rapped about gangsta-rap topics, but they focused on partying, drugs and sex more than violence, crime and guns. Classic G-Funk albums include DJ Quik's Quik Is the Name and Snoop Dog's Doggystyle. Hardcore, gangsta and G-Funk rappers often adopted gangster images and their explicit language and the way they rapped about women upset many people. But many others, especially teenage boys, loved these styles and helped them become the sound of mainstream hip hop.

Hip Hop in the 21st Century

Hip hop became a major genre of popular music in the 21st century, with hip hop singles and albums topping the charts worldwide. Local hip hop scenes developed in many countries and produced successful artists like the UK's Dizzee Rascal and Canada's Drake. Many female rappers also became successful, including Missy Elliott, Lil' Kim, Lauren Hill and Nicki Minaj. Hip hop has had a strong influence on 21st-century pop music, with many pop songs including elements of hip hop. Pop singers and rappers often collaborate to produce tracks with catchy pop choruses and rapped verses like the single See You Again, a collaboration between pop singer Charlie Puth and rapper Wiz Khalifa that topped the charts in 96 countries in 2015.

In the 1990s, most major artists were from New York or Los Angeles, but artists from the South became popular after 2000. They included the duo Outkast who combined Southern-soul grooves and riffs with clever, entertaining raps. Other popular artists from the South include Usher, T.I., Ludacris and B.o.B. from Atlanta, Three 6 Mafia from Memphis, Bun B from Texas, and Lil Wayne from New Orleans. More recently, Southern artists like Future and Young Thug have been creating exciting new styles of alternative hip hop.

Midwestern artists also became popular at this time. Marshall Mathers, better known as Eminem, was surrounded by hip hop culture in the poor Detroit neighbourhood in which he grew up. As a teenager he won local rapping competitions, one of the first white rappers to do so. His natural flow and the honesty and humour of his raps won over the crowds, but because he wasn't a gangsta rapper he couldn't get a record contract. After struggling for many years, he finally got a record deal. Nearly all of his albums have topped the charts worldwide and he's now one of the best-selling artists of all-time.

Another major artist from the Midwest is Chicago's Kanye West. In 2004 he released The College Dropout, the first of a series of chart-topping alternative hip hop albums that helped change the direction of hip hop music. Kanye and Eminem proved that rappers didn't have to make gangsta rap records to succeed, and alternative hip hop soon replaced gangsta rap as the genre's most popular style. While most hip hop artists are either producers or rappers, Kanye is regarded as a master of both. His sample-heavy tracks have used elements of classical music, gospel, jazz and soul as well as rock and R&B, and he uses many rapping styles, from slow and relaxed to fast and aggressive. He's often called the most influential hip hop artist of the 21st century because of his role in changing hip hop's direction and because of the number of styles he's helped to create like the electronic rap of Black Skinhead and the gospel-influenced hip hop of Jesus Walks.

(Warning: Some of these albums have explicit lyrics.)

beats (noun): the breakbeat rhythms that MCs rap to in hip hop music - Who produced the beats on this album?

block party (noun): a free party on the streets of a city block - Are you going to the block party on Saturday?

collaborate (verb): to work together with someone to produce something - Has Kanye collaborated with Drake yet?

deejay (verb): to perform the skills of a club or hip hop DJ - Who's deejaying for Nas these days?

DJ mixer (noun): a small mixer made for DJs - All you need is two turntables, a DJ mixer and some records.

duo (noun): two people who make music or perform together - Who's on your list of best hip hop duos?

explicit (adjective): offensive, obscene or "rude" language - Has the album got an explicit language warning?

flow (noun): the ability to rap rhythmically and stylishly - He's been practising, so his flow's getting better.

MC (or "Master of Ceremonies") (noun): a DJ's onstage announcer, esp. one who raps - Does your MC ever forget his raps?

rap (2) (verb): to speak rhythmically in rhymes over a hip hop beat - You want me to rap? I've never rapped in my life!

rhyme (noun): a word that ends with the same sound as another word - If you don't use rhymes, you can't call it rapping.

sample-heavy (adjective): having many sampled sounds - If you like sample-heavy hip hop, you'll love this album.

scratching (noun): moving a record quickly on a turntable to create a rhythmic scratching sound - There's a lot of scratching in his beats.

turntable (noun): a rotating plate that records sit on while being played - Instead of listening to the music on your iPod, let’s get out my dad’s old turntable.