What is Pop Music? 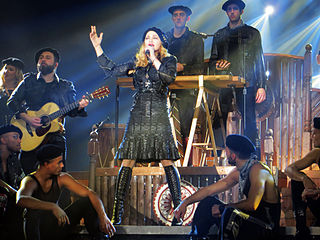 Pop music is the genre of popular music that produces the most hits. A hit is a song that sells many copies, and the latest hits are listed every week on the charts. To get on the charts, a song must be released as a single, although most singles are also released on an album. Songs that become hits almost always share certain features that are sometimes called the pop-music formula. They have a good rhythm, a catchy melody, and are easy to remember and sing along to. They usually have a chorus that's repeated several times and two or more verses. Most pop songs are between two and five minutes long, and the lyrics are usually about the joys and problems of love and relationships. Pop songs are produced by groups like the boy band One Direction and the girl group Girls' Generation, and by pop singers like Justin Bieber and Madonna.

Not all hit singles are produced by pop artists. They're also produced by artists from many other genres like country music singers Carrie Underwood and Taylor Swift, rock groups Radiohead and Foo Fighters, folk singers Bob Dylan and Mumford & Sons, singer-songwriters Elton John and Ed Sheeran, contemporary R&B and soul music artists Beyonce and Adele, dance-music artists Daft Punk and Skrillex, and hip hop artists and rappers Kanye West and Eminem. Artists like these produce hit singles by writing songs that follow the pop-music formula but include elements of their own genre, and by doing this they can create their own unique style of pop music. Look at the list of best-selling artists below and notice how many have experience in more than one genre. It's artists like these who are most likely to create new styles of pop music in the future.

FREE Podcasts 🔈 Many of these listening exercises have transcripts, vocabulary notes and comprehension questions.
Video: Happy by Pharrell Williams. The style combines the 60s soul of Curtis Mayfield with gospel and pop. The first verse begins at 0:07 and the first chorus begins at 0:30.

You can learn a lot more music vocab, and learn all about the history of popular music and its other main genres of rock, country, soul, dance and hip hop, by checking out the other pages here in EnglishClub's music section.

album (noun): a collection of songs released as a digital download or a 12-inch LP record - Do you have Michael Jackson's album Thriller?

catchy (adjective): enjoyable when first heard, and difficult to forget - It's so catchy! I can't stop hearing it in my head.

(the) charts (noun): lists of the best-selling songs of the previous week - Our single got to the top of the charts!

chorus (noun): the part of a song with the same melody and words each time it's heard - I'll sing the verses, and you sing the choruses.

formula (noun): a method or plan that's believed to succeed - What's your formula for success in business?

funk (noun): a dance-music genre that combines R&B, rock, soul and jazz - You need a great sense of rhythm to play funk.

hit (noun): a best-selling song on the pop-music charts - It's a great song. It'll be a hit for sure.

pop song (noun): any song that follows the pop music formula - Paul's favourite pop song is God Only Knows by The Beach Boys.

rapper (noun): an artist who performs raps over a hip hop beat - My daughter wants to be a rapper when she grows up.

single (noun): a song released as a digital download, or as one of two songs on a 7-inch record - Have you heard their latest single?

soul music (noun): a genre that combines elements of gospel music, R&B and pop - My favourite soul singer of all-time is Al Green.

verse (noun): the part of a song with the same melody but different words each time it's heard - The song has a chorus and three verses.