These pages look at the vocabulary of Popular Music through its history, genres, people and songs. Each page has a Wordchecker—with example sentences—to explain vocabulary on that page. For a full list of vocabulary used see Vocabulary of Music. 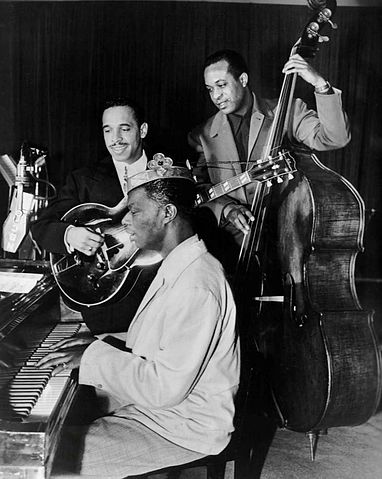 Nearly all of the most important genres of popular music in the last century have come from the USA. This is where African and European musical traditions came together, and it's this mixture of traditions that gave birth to popular music.

When millions of Africans were transported to America as slaves in the 18th and 19th centuries, their melodies and rhythms went with them. They knew that singing together made working easier, and it was in these work songs that African rhythms and melodies were preserved until slavery ended in 1865. Many African Americans became Christians and sang hymns in church. Others learned to play popular songs and dance tunes for money. But whenever they sang and played, the African rhythms of the old work songs could be heard. And when they expressed their feelings by creating new songs, African melodies could be heard in the tunes.

It was this new combination of African and Western music that led to the genre we now call "blues". Some blues songs told stories of heartbreak and pain, and these were often slow and sad. But others were about being in love, or having fun, and these were up-tempo and good to dance to. Various blues styles developed over the years, some in small towns of the American south and others in cities like Chicago and New Orleans. But wherever the music was played, listeners heard a sound that was going to influence nearly every genre of popular music to come, from jazz and soul to hip hop. If you'd like to hear some early blues, try searching for the recordings of Blind Willie McTell, Bukka White and Lightnin' Hopkins. For later blues, try Billie Holiday, Muddy Waters, Howlin' Wolf and John Lee Hooker.

Most African American musicians only played blues, but some played classical music as well and learned European harmony. Some even mixed European harmony with the rhythms and scales of blues, and it was from this mixture that "jazz" was born. One of jazz's greatest musicians was the trumpet player Louis Armstrong, who helped to develop many styles of jazz. He was in New Orleans, his home town, in the 1910s when the marching-band style of New Orleans jazz (or "dixieland") was being born. In the 1920s he was in Chicago inventing new ways of improvising with Joe "King" Oliver and his band. Then he was in New York City in the 1930s when big band jazz and swing were developing. These new styles were played by jazz orchestras with a rhythm section (drums, double bass, piano and guitar), brass and woodwind sections, and sometimes strings and one or more singers. Swing was hugely popular in the 1940 s, becoming the music that nearly everyone danced to. Some of the greatest jazz orchestras were those led by Duke Ellington, Count Basie and Fletcher Henderson, with whom Louis Armstrong played. All the most popular singers of the day, like Bing Crosby, Frank Sinatra and Nat King Cole, sang with jazz orchestras.

But by the 1950s many young musicians no longer wanted to play in jazz orchestras. They wanted the freedom to improvise and began experimenting in their own bands. Before long they were playing exciting new styles like bebop and modal jazz. These new styles weren't as easy to dance to as swing, so they weren't as popular, but they found a new audience of serious listeners for whom modern jazz was art music rather than popular music. The best of these musicians included Charlie Parker, Thelonious Monk, John Coltrane, Miles Davis and Charles Mingus. 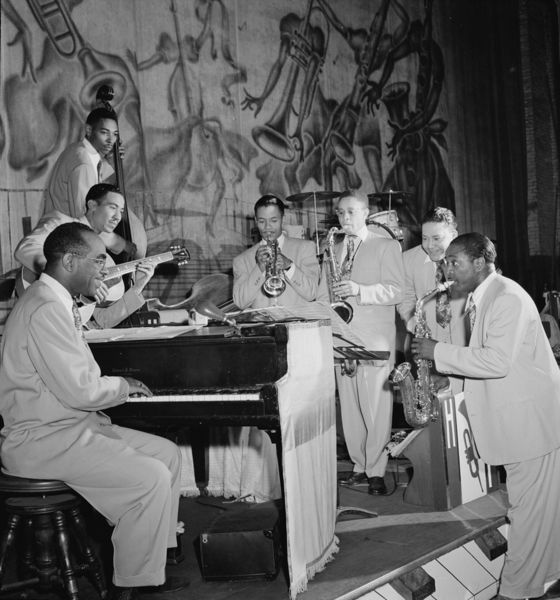 As jazz was becoming more and more popular in the 1930s and 1940 s, another new genre was starting to develop. Many African Americans were professional blues musicians, but making money wasn't easy. They formed small bands and looked for work in cheap bars and clubs. But to get work, they had to attract audiences. Most young people who went to these places thought blues was old-fashioned, so the bands had to develop a new style, and what they created was "rhythm and blues" (or R&B*).

The early forms of R&B were loud and lively and mostly played on drums, double bass, and electric guitar. Singers were men or women with big voices, and audiences loved it. The style quickly spread throughout the country, with larger bands adding piano, trumpet and saxophone. R&B was great fun and perfect for dancing, and by the mid-1940s many bands were selling records. Two of the biggest sellers were T-Bone Walker and Louis Jordan's "Tympany Five", who had a number-one hit in 1944 with G.I. Jive. Later R&B artists include Ruth Brown, Bo Diddley, Muddy Waters and Ray Charles.

*The term "R&B" is now used to describe romantic soul songs and ballads, a very different style to the original R&B.

By the early 1950 s, another new genre called "rock and roll" (or "rock'n'roll") was being created by musicians who could play both R&B and Western Swing, a popular style of country dance music. This new music was played on the same set of instruments as R&B - electric guitar, double bass and drums - with the guitarist often singing as well. It had a strong blues beat and an R&B feel, but the melodies were like those of country music. It was great to dance to, and rock and roll dance styles soon developed as well. The lyrics were fun to listen to, and it quickly became popular, especially when teenagers heard rock and roll records on the radio.

One of the first bands to record was "Bill Hayley and His Comets" who had a hit single with Rock around the Clock in 1954. They were greatly influenced by R&B artists like Louis Jordan and Big Joe Turner, as were many others like Little Richard and Chuck Berry, whose 1956 single Roll Over Beethoven became a huge hit. Jerry Lee Lewis, who amazed audiences with his wild piano playing, also became very popular.

But rock and roll seemed wild and dangerous to many parents, especially when they saw the sexy dancing of a handsome young singer named Elvis Presley. There was nothing they could do to stop their kids from loving rock and roll and being fans of Elvis, however. He became hugely successful and made rock and roll one of the most popular styles of music not only in America, but across the world. Elvis had many hit singles, including Hound Dog, Heartbreak Hotel and Jailhouse Rock, and he soon became known as "the king of rock and roll" or simply "the king".

In the early 60s a new genre called Rock Music began to develop when young musicians combined the rock and roll of artists like Elvis with elements of R&B. New styles of Country Music also became popular in the 60s, as did a new style of melodic R&B called Soul Music. Later in the 60s soul artists like James Brown developed a more rhythmic style called funk, and funk led to many new styles of Dance Music in the 70s, the 80s and beyond. In the late 70s a new genre called Hip Hop also developed. Hip hop is now one of the most popular styles of music in the world, and like all major genres of popular music it’s produced many hit singles on the Pop Music charts.

The popularity of artists is usually measured by the number of singles and albums they sell, and sales are listed in the music charts. The ten most successful artists of all time are listed below. Read the list and see how many different genres of popular music you can find.

Did you notice that the list doesn't include any young artists? This is because they haven't had time to sell as many recordings as the artists listed. But if you look at a similar list in a few years, you might find some of today's popular artists included as well.

album (noun): a record or sound file with an ordered collection of songs - Michael Jackson's album Thriller has sold more copies than any other album.

bebop (noun): a complex style of up-tempo jazz from the 1950s - The best bepop player I ever heard was Charlie Parker.

big band (noun): a large jazz band, esp. one that plays big band jazz - Most popular singers of the 30s and 40s had their own big bands.

(the) charts (noun): a list of the best-selling singles or albums of the previous week - That song Happy by Pharrell Williams was at the top of the charts for weeks.

fan (noun): someone who likes a particular artist or band very much - Barry's a really big fan of Bob Dylan.

hit (noun): a best-selling song near the top of the music charts - One of the biggest hits ever was Bohemian Rhapsody by Queen.

improvise (verb): to invent music spontaneously while playing - If you want to be a jazz musician, you have to learn how to improvise.

record (noun): a thin disc of black plastic on which recorded music is imprinted and sold - I bought lots of punk rock records in the 1970 s.

scale (noun): a series of notes in a fixed order from lowest to highest - The major and minor scales each have seven notes.

single (noun): a small record with a song on each side, or a sound file with one song - The Beatles had more hit singles than any other band.

soul (noun): a style of music that combines R&B and gospel music - Two of my favourite soul singers are Al Green and Marvin Gaye.

strings (noun): an orchestral string section with violins, violas, cellos and double bass - Only the biggest jazz orchestras had strings.

tune (noun): a song or melody - I know the tune, but I can't remember what it's called.

up-tempo (or "uptempo") (adjective): having a fast beat - If you want to write a happy song, it should be up-tempo.

woodwind (n): instruments played by blowing across a hole (e.g. flute) or through a reed (e.g. saxophone) - Are you sure the saxophone is a woodwind instrument?