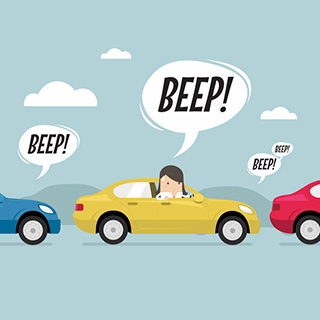 Onomatopoeia is the formation of a word through imitation of a sound associated with that word. For example, the word buzz imitates the sound of some flying insects. And the word splash is like the sound made by something falling into water. Both buzz and splash are onomatopoeic words. Some onomatopoeic words are used for literary or poetic effect, but many are used in everyday speech.

Here are twenty very common onomatopoeic words, together with their meanings and example sentences for verb and noun, along with an audio recording in each case.

(of a horn or electronic device) make a short, high-pitched sound
verb: The drivers kept beeping their horns until the van moved out of the way.
noun: I waited for the recording to end, then left a message after the beep.

(of fire) make short, sharp, repetitive noises in quick succession
verb: The fire crackled loudly when I threw another log on it.
noun: The only sound I could hear was the comforting crackle of the fire.

(of a bird or other winged creature) make a noise moving wings quickly
verb: The budgie was fluttering around the kitchen.
noun: I heard a flutter and realised a canary had flown through the window.

(of a person) laugh in a light, silly way with short repeated gasps
verb: The boys couldn’t stop giggling when the teacher found the frog on her desk.
noun: There were giggles from the audience when the actor forgot his lines.

(of a person) make a noise swallowing food or drink quickly in large mouthfuls
verb: He gulped down his entire meal before I’d even started mine.
noun: George finished his tea in one gulp, then got up to leave.

(of a human or animal) make a short, unintentional sound from the throat
verb: The teacher sent me out of the room because I couldn’t stop hiccupping.
noun: The best way to cure hiccups is to drink water upside down.

(of a snake) make a sound like a long ‘s’ to express anger
verb: When the snake started hissing, I knew I was in danger.
noun: The cobra let out a hiss before striking the terrified child.

(of a human or machine) make a, steady continuous sound
verb: The happy child hummed as she put away her toys.
noun: The gentle hum of the fridge told me the power was back on.

(of metal objects) make a light ringing sound when shaken together
verb: The coins jingled in my pocket as I ran down the road.
noun: The jingle of keys in his hands told me Gary was approaching.

(of a person) make a long, low sound expressing suffering or pleasure
verb: Tom was moaning in pain after his sister kicked him in the stomach.
noun: Ann let out a moan of despair when she realised what she’d done.

(of a balloon, popcorn, cork, bubble gum, etc.) make a quick, expolosive sound
verb: He popped the cork on the champagne and the celebrations began.
noun: We heard a loud pop and realised his balloon had burst.

(of a cat) make a slow, continuous sound when content or showing affection
verb: The cat jumped onto my knee and started purring loudly.
noun: The cat’s purr got louder the harder I stroked its neck.

(of a duck) make a harsh throaty sound
verb: The ducks quacked loudly as they swam towards the bread.
noun: The duck let out a quack, then disappeared under the water.

(of objects, a rattlesnake) make a rapid series of short sharp noises
verb: As the wind got stronger, the windows started to rattle.
noun: I heard the rattle of the snake’s tail, and knew I was in trouble.

(of a lion or large cat) make a deep prolonged sound to express anger or distress
verb: I nearly jumped out of the skin when I heard the tiger roar.
noun: The lion let out a roar and we knew not to come any closer.

(of thunder or a stomach) make a continuous deep resonant sound
verb: As lunchtime drew nearer, my stomach started to rumble.
noun: The distant rumble of thunder told me the storm was approaching.

(of a person, or brakes) make a shrill high-pitched sound
verb: When his sister pulled his hair, the young boy started to screech.
noun: I heard the screech of brakes and ran to see what had happened.

(of food) Make a hissing or popping sound when frying
verb: The sausages started to sizzle as soon as I dropped them into the pan.
noun: The sizzle of the bacon in the pan was making my mouth water.

(of a person or animal) make a snorting or grunting sound while asleep
verb: John was snoring so loudly that I had to find somewhere else to sleep.
noun: I heard a snore from the cot and realised the baby had finally fallen asleep.

(of a child or dog) make weak intermittent crying sounds to show pain or distress
verb: The puppy started to whimper as soon as I shut the door.
noun: Sam let out a whimper of pain as I put the antiseptic on his cut.