See Wordchecker below for definitions.

Paper sizes around the world are divided mostly into:

Also known as the "A Series" and "ISO 216", the system is such that when folded in two all A sizes retain their proportions, which are 1 to the square root of 2 (1:√2 or approximately 1:1.4). This makes A sizes easy to scale. The system was developed in Germany in the early 1920s and then spread internationally. 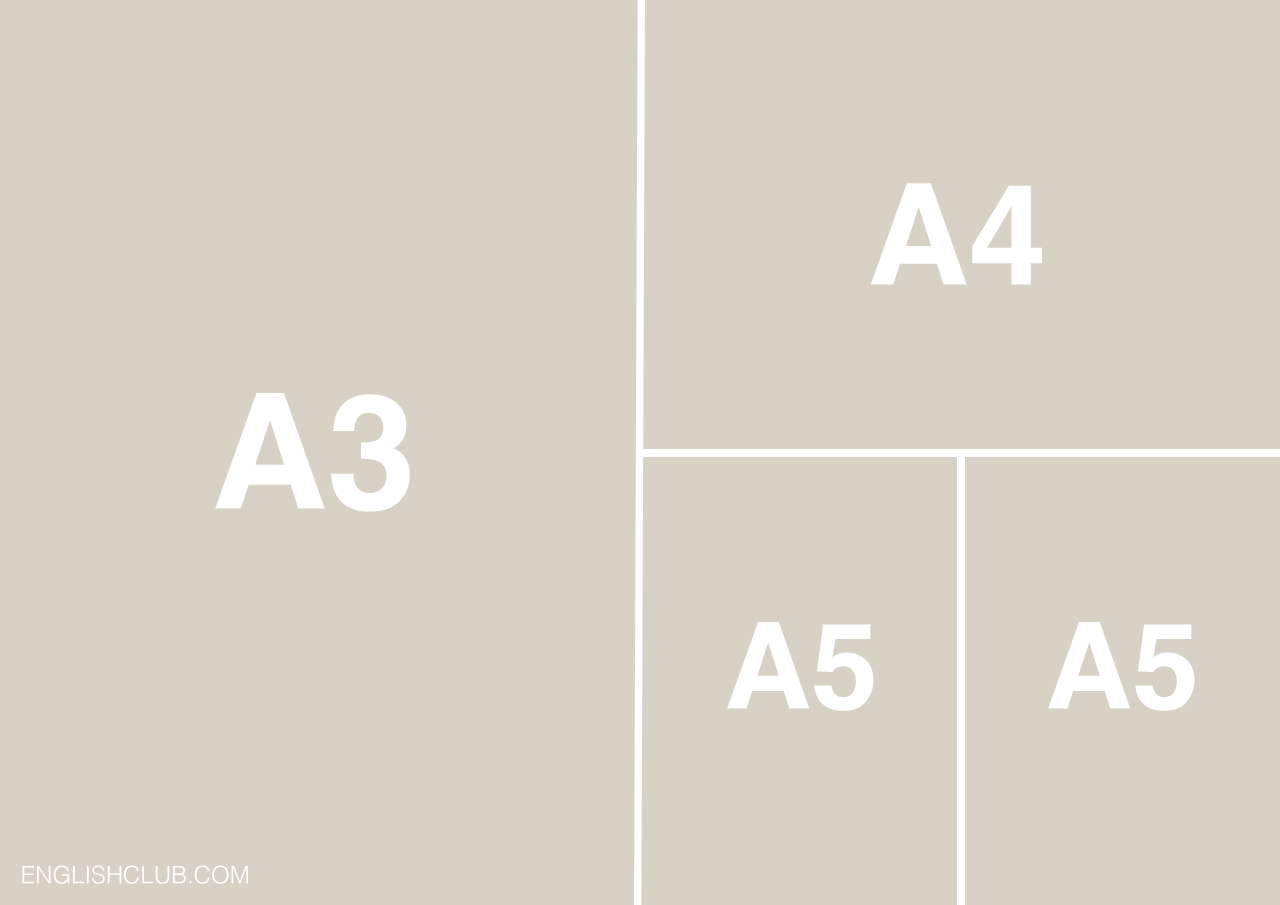 This diagram shows three formats from the ISO A series: A3, A4 and A5. The eagle-eyed among you will spot a fourth format: A2. When folded in two, A3 becomes A4, A4 becomes A5, and so on. The important thing is that each A size has the same proportions or "shape": 1 is to the √2.

The International ISO system is based on metric units—millimetres (mm) and centimetres (cm). The metric dimensions are also often converted into imperial units—inches (in or ").

The most common A paper sizes are:

A3 paper is quite large. It is possible to buy A3 photocopy paper, though not all photocopiers/printers can handle it. It is typically used for:

A4 is the most commonly used International paper size. This is the size used for most:

Note that some items (brochures for example) may be A4 in size but actually made from A3 paper folded in two.

Note that some items (greetings cards for example) may be A5 in size but actually made from A4 paper folded in two.

Sizes larger than A3 exist but are rarely used by the general public. Sizes smaller than A6 (A7, A8 etc) exist for such things as very small notepads, visiting cards etc. 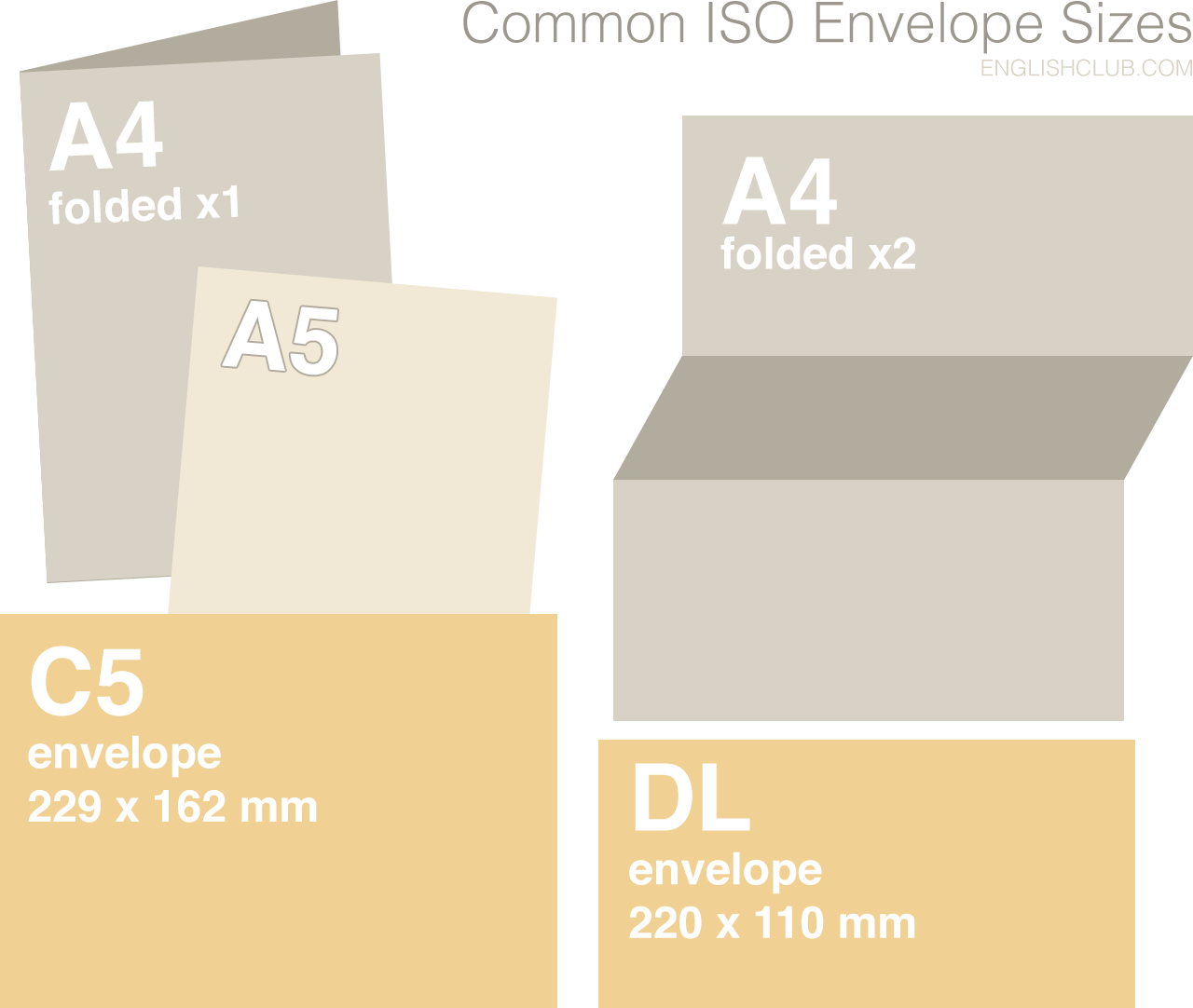 Paper weight
Regardless of the size system, you may notice markings such as "g/m2" or "gsm" on paper when you buy it. This relates to the "weight" of the paper, and the weight of the paper is closely related to its thickness. Typically, photocopy paper is 80 g/m2 (80 grams per square metre) which means that a square metre of the paper weighs 80 grams. This is a very standard "weight" for office paper. If it's slightly heavier, the quality is probably slightly better (for example 100 g/m2 or 120 g/m2). Much lighter, it could be "airmail" paper or even tissue paper. Over 200 g/m2, it becomes card rather than paper, and can go all the way up to 460 g/m2.

Paper sizes in the USA, Canada and Mexico (and the Philippines and Chile) are based on traditional sizes, which are difficult to scale. Since 1995, North American sizes have often been prefaced with "ANSI" (American National Standards Institute). The most commonly used North American paper size is Letter (8.5" x 11").

The ANSI system is based on imperial units—inches (in or "). The imperial units are also often converted into metric units—millimetres (mm) and centimetres (cm).

Note that International paper sizes are increasingly available and used in North America.

The most common ANSI paper sizes are:

Tabloid and Ledger sizes have the same dimensions but a different orientation. Tabloid is "portrait" or vertical, while Ledger is "landscape" or horizontal. They are both typically used for small posters, flyers, brochures, drawings, diagrams and large tables. Note that Ledger can fold in two to make Letter size.

Letter size paper is the most commonly used ANSI paper size. It is close to the ISO A4 size, and is typically used in North America for: 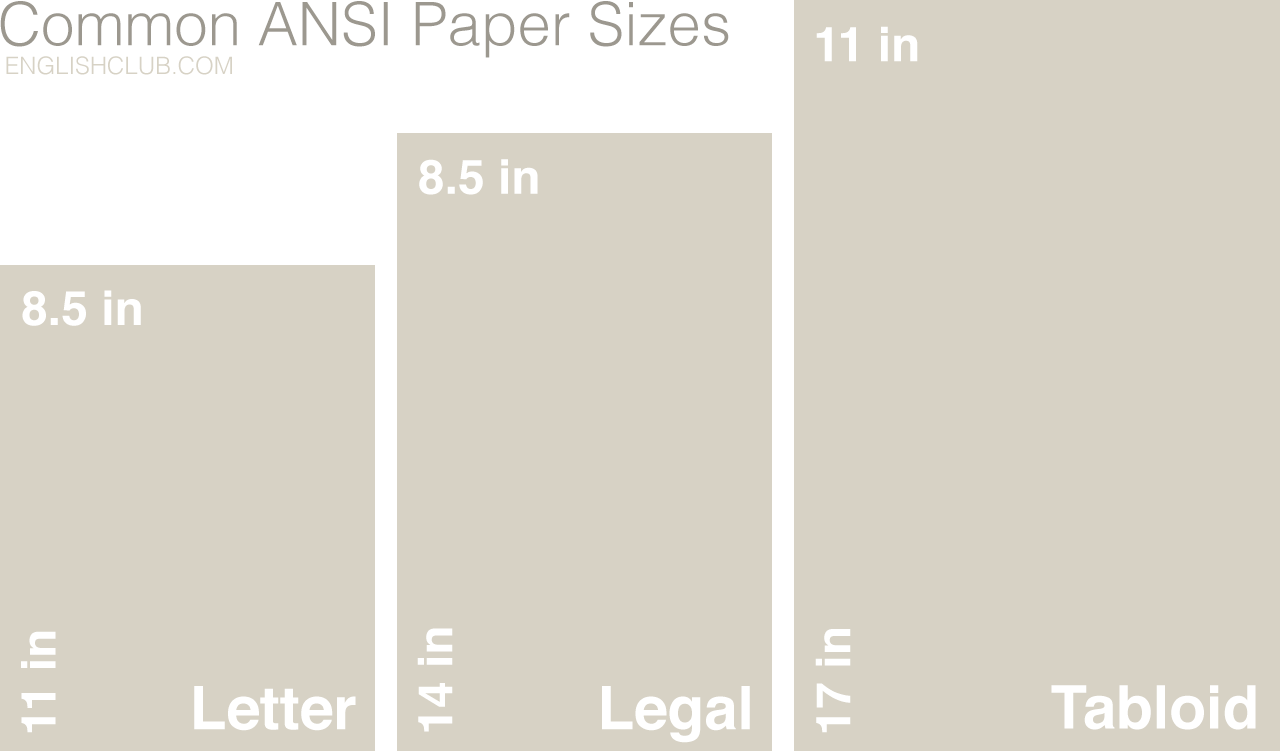 Half Letter is the same as Letter size folded in two. It is close to the ISO A5 size, and is typically used for private letters, invitations, flyers, postcards, small notepads, greetings cards, organizers and diaries. Also known as Statement, Stationery, Memo, Half Size and Half A.

This range of larger sizes is typically used by architects and draughtsmen, and seldom used directly by the general public.

There are dozens of envelope sizes for North America, and several different "styles" of envelope relating to the shape, material and strength. The most common styles are Commercial (mainly for office and business use), Announcement (more for personal use) and Catalog (for catalogues, brochures and heavier contents). Of Commercial envelopes, "No.10" is the standard business size envelope accommodating Letter size paper folded in three or Legal size paper folded in four (close to the long-format ISO DL envelope).

flyer (noun): a leaflet advertising an event or product

inch (noun): imperial unit of measure, 2.54 centimetres; abbreviated as in or "

landscape (as adjective): for paper—horizontal format

portrait (as adjective): for paper—vertical format

proportions (noun): for paper—comparative measurements of width and height

scale (verb): reduce or increase in size according to a common system

A size chart illustrating the ISO A series