This page covers the vocabulary and language of athletics by looking at its background, equipment and people. Check your understanding with the vocabulary quiz and comprehension quiz.

Many people have memories of competing in athletics, or "track and field", in school. Some competed in running events, such as sprints and longer-distance races, or jumping events, such as high jump and long jump, or throwing events, such as discus and shot put. While most people give up athletics after leaving school, a few go on to become professional athletes who compete in top meetings around the world. Many people enjoy watching these highly-skilled, super-fit athletes when they compete in major competitions such as the IAAF World Championships in Athletics and the Olympic Games.

As long ago as the 8th century B.C., athletics events were being held as part of the original Olympic Games in ancient Greece. Some of the events from that time, such as javelin and discus throwing, are still part of modern athletics. In 19th-century England, athletics competitions were being held in military and public schools such as the Royal Military College in Sandhurst and Exeter College in Oxford. By the time of the first modern Olympic Games in 1896, the sport had developed to such an extent that "track and field" events were central to the competition. From then until now, athletics have formed the foundation of major sporting competitions such as the Commonwealth and Asian Games, as well as the Olympics. Since 1983, the World Championships in Athletics have also been boosting interest in the sport. This biennial competition is organized by the International Association of Athletics Federations (IAAF), and is now seen as one of the top events in the world of sports, along with the Summer Olympics and the FIFA World Cup football tournament.

In both indoor and outdoor competitions, men and women compete in their own events. While they usually run the same distances in track events, hurdles are lower for women. In field events, the weights of the shot, discus, javelin and hammer are less for women than for men.

Track events include a wide range of races for runners. The shorter races are called sprints and they include 60 metre (indoors only), 100m, 200m and 400m. Middle-distance races are the 800m, 1500m, the mile, the 3,000m, and the steeplechase, in which runners have to jump over barriers and water jumps. Long distance events are the 5,000m and 1,0000m, along with athletics' longest race for runners, the marathon. Most of this 42.195 km race is run on public roads, with only the last part being run on an athletics track. Other track events are the hurdles, including the 110m high hurdles (100m for women) and 400m hurdles, and the relay events, the most common of which are the 4 x 100m relay and the 4 x 400m relay. In the relay races, runners carry a baton and pass it to the next runner as they finish their part of the race.

There are a number of athletics competitions regularly held around the world for professional athletes. The biggest of these is the World Championships, held every two years by the IAAF. There are also several regional competitions, such as the European Championships, the Pan-American Games, and the Commonwealth Games. In addition, there is the Golden League circuit in which athletes who win their chosen event at all six meetings share a $1,000,000 jackpot. This competition is attracting more and more interest among sports fans, but the high point of interest in athletics still occurs every four years when the track and field events of the Summer Olympics are held. Billions of enthusiastic viewers around the world watch TV broadcasts of these events as they follow the fortunes of their country's top athletes.

Paavo Nurmi was born in Finland in 1897, and grew up to become one of the world's greatest middle-distance and long-distance runners. He still holds the record for having won the greatest number of Olympic track and field medals, with 12 medals in all. These include 9 gold medals which he won in the 1,500m, 5,000m, 10,000m, cross country, cross country team and the 3,000m team races. Due to this fact he is often regarded as the greatest track and field athlete of all time. Known as the "Flying Finn", he is probably also the only athlete to have had a heavenly body named after him. In 1939, Finnish astronomer Yrjö Väisälä named an asteroid after him, calling it 1740 Paavo Nurmi. 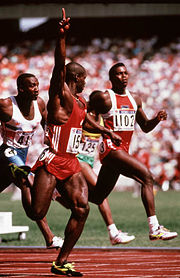 Carl Lewis, regarded by many as the greatest competitor of all time in athletics, was named the world male athlete of the 20th Century by the IAAF. Born in 1961 in the U.S.A., he became a champion sprinter and long jumper who, like Paavo Nurmi, won 9 Olympic gold medals. Lewis won the gold medal for the long jump in the 1984, 1988, 1992 and 1996 Olympic Games. He also won gold medals in 1984 and 1988 in the 100 metres sprint and a gold medal for the 200 metres in 1984, as well as a silver medal for the same event in 1988. His two other Olympic gold medals were won in 1984 and 1992 in the 4 x 100 metre relay races. British Formula 1 racing driver Lewis Hamilton was named after Carl Lewis because Hamilton's father was a huge fan of the great American athlete. (Carl Lewis, above, is on the right wearing number 1102.)