This page covers the vocabulary and language of badminton by looking at its background, equipment and people. Check your understanding with the vocabulary quiz and comprehension quiz.

From the backstreets of Bangkok to the beaches of Brazil, people can be seen hitting feathery projectiles called shuttlecocks with light-weight rackets. These shuttlecocks and rackets are the basic tools of badminton, and they are all you need for a session of "bat" in which you and a friend hit a shuttlecock to each other for as long as possible without letting it touch the ground. This fun activity is not only a good form of exercise, it's also a great way of practising the skills you'll need for a real game of badminton should you ever find yourself on a proper badminton court. While growing in popularity as a fun way of keeping fit, badminton is also developing fast as a professional sport with its own calendar of exciting tournaments and its own band of star international players.

There is no "g" in badminton (that is, it is not spelled "badmington").

Games similar to badminton have existed throughout history, from ancient Greece to medieval Japan and colonial India, where a form of the game called "poona" was played. In the 1860's, British Army officers posted to India took the game home to England, where it became a popular pastime for the wealthier classes. In 1873, the Duke of Beaufort introduced the game to his guests during a gathering at Badminton House, his home in Gloucestershire. The sport was then known as "The Game of Badminton" for a number of years, until the name was shortened to "badminton". The Badminton Association of England was formed in 1893 and soon after they published the first set of rules. In 1899 they organized the All England Open Badminton Championships, the world's first major badminton competition. The Badminton World Federation (BWF) was established in 1934, and since then the game has developed into a truly international sport, with top players now coming from Denmark, China, Indonesia, South Korea and Malaysia. Since 1992, badminton has also been an Olympic sport, with events for both men and women.

How The Game Works

To begin a singles game, players stand in diagonally opposite service courts (see diagram at right) and the server then serves the shuttlecock underhand from below the waist. If the receiver thinks the serve is a fault, meaning it will land outside the receiver's service court, he or she can leave it and win the point if it does go out. But if the receiver thinks the serve is good, he or she must return it before it bounces. If the return is good, a rally begins. The rally continues until someone wins it by hitting a good shot which their opponent cannot return, or until someone loses it by hitting a fault. Faults include hitting the shuttlecock into the net, hitting it outside the court, or hitting it twice with two separate shots before it goes over the net. Whoever wins the rally earns one point, and serves to start the next point. Players can use a range of shots during a rally, including drop shots, drives, clears, smashes, kills, net shots and push shots. Top players learn to disguise their shots, and try to trick the opponent into thinking they're about to hit one type of shot, but then hit a very different type of shot, hoping to win the point by surprising the opponent.

The Badminton World Federation (BWF) runs several tournaments for national teams, including the World Men's Team Championship, also known as the Thomas Cup, and the World Team Championships for Women, also known as the Uber Cup. These tournaments are held between national teams every two years, as is The Sudirman Cup, a mixed team event that began in 1989.

International tournaments for individual players include the BWF World Championships, in which the 64 highest-ranked players in the world are invited to compete every year for the title of "World Champion". Badminton first became an Olympic sport at the Barcelona Olympics in 1992. For the men's and women's singles events, qualification is granted to the top 29 players in the BWF's ranking list. For the men's doubles, the women's doubles and the mixed doubles, the 19 top-ranked pairs are invited to compete. Only five countries have won the Olympic gold medals since badminton's introduction in 1992 - China (8), Indonesia (5) and Korea (5) and Denmark (1). 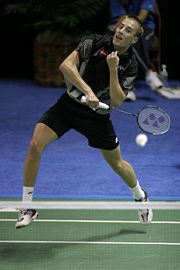 Peter Høeg Gade (right) was born in 1976 in Denmark. He is one of the most successful badminton players of recent times, leading the world rankings from 1998 to 2001. He won the All England Open Badminton Championships singles title in 1999 as well as four European Championship crowns in the men's singles event and sixteen Grand-Prix titles. In 2006, at the age of thirty, he regained the top spot in the world rankings after winning the Singapore Open. Gade is well known for his tactical brilliance, his movement around the court and his ability to disguise his shots.

Fu Haifeng was born in 1984 in Guangdong province in the People's Republic of China. He was ranked number one in the world in 2007 after being the 2006 World Champion in men's doubles together with his playing partner, Cai Yun. Much of Fu Haifeng's fame in the world of badminton results from the fact that he set the official world smash speed record on June 3, 2005. The shuttlecock's speed was measured at 332 km/h (approximately 206 mph), making badminton the fastest racket sport in the world.