This page covers the vocabulary and language of basketball by looking at its background, equipment and people. Check your understanding with the vocabulary quiz and comprehension quiz.

Basketball is played by millions of people, both men and women, in all parts of the world. Professional basketball is watched by millions more on TV. The game is played between two teams, with five players per team allowed on the court at any one time. Points are scored by getting the ball through a hoop called 'the goal' or 'the basket', and the team scoring the most points wins.

In 1891, Dr. James Naismith, a Canadian physical education instructor at YMCA Training School in Springfield, Massachusetts, USA, decided to create a new indoor game to keep his students fit during the cold winter months. He experimented with a team game in which players threw a soccer ball to each other and scored by throwing it into a peach basket nailed high on a wall. Later that year he wrote the first version of the rules of what he now called 'Basket Ball'. In 1906, the baskets were replaced by metal hoops in front of backboards. The ball still had to pass through the hoop from above to score a goal, however, as it did when baskets were used.

The game soon spread to other U.S. schools and universities. In the early twentieth century, basketball competitions and leagues were set up all over North America, but most didn't last long. Then, in 1946, the Basketball Association of America (BAA) was formed to organize the top professional teams in the U.S.A. and Canada into one professional league. The BAA became the National Basketball Association (NBA) in 1949, and today the NBA is the world's top professional basketball league. Most of the world's best players are with NBA teams, attracted by the competition's popularity, its high standard of play, and the high salaries. 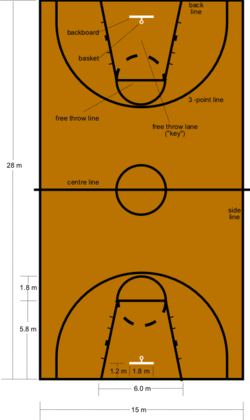 Basketball is played on a rectangular court 28 metres long and 15 metres wide (approx. 92 ft by 49 ft) with a basket at a height of 3.05 metres (10 ft) at each end. Most indoor courts have a floor made of wood. Points are scored by throwing the ball through the opponents' basket. A goal scored from inside the three-point line earns two points (see diagram at right), and a goal scored from outside the three-point line earns three points, and goals from free throws earn one point.

NBA games are played over four quarters of twelve minutes. Teams include twelve players, but only five can be on court at one time. Players can be substituted as often as the coach likes. Each coach has a limited number of time-outs they can call during a game, and the game clock is stopped whenever play stops. Several officials oversee each game, including three on-court referees who call fouls, and table officials who keep score, run the game and shot clocks, and keep track of fouls and substitutions.

A personal foul is committed when a player challenges another player unfairly, such as by blocking their run or hitting their arms. A player or coach who argues with a referee commits a technical foul. Fouls can be punished with a free inbound pass, free throws at goal, or with sending off. A player who commits five fouls, or six in the NBA, can no longer take part in the game and is said to have been 'fouled out'.

Players shoot for goal with a set shot if both feet are on the ground, or with a jump shot if the player is in mid-air. Other shots are the lay up (shooting, often off the backboard, while moving towards the basket) and the slam dunk (shooting straight down from above the basket). Passing can be done with a chest pass, a bounce pass or an overhead pass. More difficult passes are the no-look pass and the behind-the-back pass, though some coaches don't like these techniques because they can easily go wrong.

Yao Ming is a Chinese player who went to the U.S.A. and joined the NBA's Houston Rockets. Standing 7'6" tall (2.29 m), he is one of the tallest players in the history of the NBA. After joining the NBA draft in 2002, he was picked by the Houston Rockets and became the first player without any American basketball experience to be selected first overall in the draft. Yao Ming has a huge following in China, and he has increased interest in basketball in China and throughout Asia.