This page covers the vocabulary and language of boxing by looking at its background, equipment and people. Check your understanding with the vocabulary quiz and comprehension quiz.

Fighting with the fists seems to come naturally to human beings. Whether kids are playfully fighting for fun, or adults are fighting in anger, many will protect themselves by holding their fists in front of the face, and attack by punching with their fists. The same actions form the basis of boxing. For thousands of years, men and boys, and sometimes girls and women, have fought in boxing matches, sometimes with gloves and protective gear, and sometimes with bare fists and little or no protection. Boxing has always been a controversial sport, loved by some and hated by others. Its fans see it as the most exciting and challenging of sports, a true test of a person's physical strength, mental alertness and courage. But those who dislike boxing see it as a brutal and dangerous activity, and some even believe it should be banned.

Carvings and paintings show people fighting with their fists over 5,000 years ago in ancient Sumeria and over 3,000 years ago in ancient Egypt. We don't know if these fights were a regulated sport like boxing, or a form of violent entertainment like gladiator fighting in ancient Rome. But by the time of the ancient Greeks, boxing had become a sport and it was part of the Olympic Games as early as 688 B.C. It then became popular in other parts of Europe, but in 500 A.D. it was banned by the Roman Emperor Theodoric the Great. Theodoric was a Christian who believed that the human face was made in God's image, and that by damaging the face, boxing also damaged God's image.

Modern boxing had its origins in England during the early 18th century, when bare-knuckled prizefighting was popular. This was not a regulated sport, however, but an illegal business run by criminal gangs who earned money by selling tickets and taking bets. There were no written rules, no weight divisions, no rounds or time limits, no protective gear like gloves, and no referee. Many fighters were seriously hurt, and some were even killed.

Improvements began with the introduction of the London Prize Ring rules in 1743. Hitting a fighter while he was down was no longer allowed, and if a fighter went down and could not continue after a count of 30 seconds, the fight was over. In 1853, more rules were introduced, with biting, head-butting and hitting "below the belt" being banned and called fouls. Improvement continued with the introduction of the Marquess of Queensberry rules in 1867, which mark the real transformation of prize-fighting into the sport of boxing. Matches would be held in a 24-foot-square ring, with three-minute rounds and one-minute breaks between them. A fighter who was knocked down was given a ten-second count, and if he couldn't get up in time, the referee would stop the fight. Thickly padded boxing gloves had to be worn to protect fighters from facial and hand injuries. The Queensbury rules still form the basis of boxing to this day.

Boxing's image was greatly improved by its return to the Olympic Games in 1908, and by the establishment of boxing commissions to further regulate the sport. They developed a ratings system, oversaw regional and national competitions and world championship matches, and handled any disputes and protests. 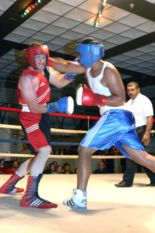 Modern boxing has two main forms; amateur and professional. Amateur boxing can be seen at colleges and universities, at national and international tournaments, and at major sporting events such as the Olympic, Commonwealth and Asian Games. Protective headgear must be worn (see photo at right), the bouts are limited to three or four two-minute rounds, and results are decided on a strict points-scoring system. Professional boxing is far more popular than amateur boxing, which is often seen as a way of developing the skills needed for the professional form of the sport. Matches are usually much longer than amateur bouts, lasting for ten to twelve three-minute rounds, and protective headgear is not permitted. Fights are more often decided by knockout or technical knockout, meaning the referee decides a fighter cannot continue because of injuries such as cuts to the face, or because of exhaustion. But if a fight goes the full distance, the result is decided by a team of three judges who keep score during the fight by awarding points for legal punches. The referee can also instruct the judges to deduct points if a fighter commits a foul. If all the judges agree on which fighter is the winner, it is a unanimous decision, but if they disagree, the result is a split decision.

Boxing involves techniques for both attacking and defending. The only attacking move allowed in boxing is punching. Kicking, kneeing, elbowing, head-butting, holding and throwing are not allowed. There are four basic punches; the jab, the cross, the hook and the uppercut. The jab is a quick, straight punch thrown with the lead hand, which for a right-handed, orthodox fighter, is the left hand, and for a left-handed, southpaw fighter is the right hand. The jab is not a powerful punch, but it's good for scoring points, for checking distance, and for starting a combination of punches. A cross is a powerful, straight punch thrown with the rear hand, which is the right hand for orthodox fighters and the left hand for southpaws. It can follow a jab to create the classic "one-two" combination. The hook is a semi-circular punch thrown with the lead hand to the side of the opponent's head. A hook can also target the lower body and this punch is sometimes called a "rip". The uppercut is a rising punch thrown with the rear hand, aimed at the jaw or deep into the stomach area. The right uppercut followed by a left hook is a powerful and dangerous combination.

Just as important as the attacking techniques are the defensive techniques. These include the protective guard, as well as techniques to evade and block punches. There are several defensive positions, called guards, which boxers use. In a high guard both hands are raised to protect the face, while in a low guard the rear hand is held lower to add protection to the body. To evade punches and avoid being hit, boxers use a number of moves. One such move is slipping, in which a boxer turns his body slightly from the hips to let a punch "slip" past. Another is swaying, in which a boxer "sways" straight back from the hips in order to move his head back and out of way of an approaching punch. Boxers also bob and weave, meaning they evade a punch by bobbing, or bending the legs and lowering the head, and then move into an attacking position by weaving, or straightening up while stepping in towards the opponent. Other defensive techniques include parrying, blocking and clinching.

In order to win a fight, a boxer must use these techniques for attacking and defending within a good overall strategy. In the early rounds of a fight, boxers figure out what their opponent's strong points and weak points are, and then try to find a winning strategy, taking into account their own strengths and weaknesses as well. As such, boxing is very much a "mental" contest as well as a physical one, and champion boxers need to be quick thinkers as well as quick punchers and movers. 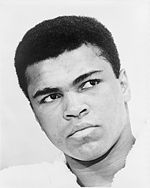 On January 17, 1942, Cassius Marcellus Clay Jr. was born in Louisville, Kentucky, U.S.A. He grew up to become the most famous boxer of all time, though most people now know him as Muhammad Ali, the name he adopted in 1964 when he converted to Islam. Ali is a former three-time World Heavyweight Champion and winner of an Olympic gold medal. In 1999, he was crowned "Sportsman of the Century" by Sports Illustrated and the BBC. Ali had the perfect body for a boxer. He stood 6-ft 3-in tall (1.91 m) and had a strong physique, but he was as fast as a much smaller man. He used his foot-speed and quick body movement to avoid punches, and this allowed him to use a low guard instead of the high guard usually used to protect the face. This made Ali look very relaxed in the ring, and he would often seem to be "playing" with his opponent, in the way a cat might "play" with a mouse, before suddenly stepping up the pace and going "in for the kill". Later in his career, when he slowed down a little, Ali developed a new style he called "rope-a-dope". With this technique he would stay on the ropes with a high guard and cover up to absorb punches to his arms and body, or lean back on the ropes and sway to avoid the punches, until his opponent wore himself out. Then Ali would begin a strong attack which usually ended the fight with a knockout. Muhammad Ali retired from boxing in 1981, though his influence on the sport will continue forever. The beauty of his early style, which Ali himself described as "Float like a butterfly, sting like a bee", will never be forgotten by boxing's many fans.