This page covers the vocabulary and language of cricket by looking at its background, equipment and people. Check your understanding with the vocabulary quiz and comprehension quiz.

Everybody agrees that the most popular sport in the world today is soccer. But which is the second most popular? Is it basketball? Maybe rugby? Tennis perhaps? No, as you've probably guessed by now, the answer seems to be cricket. The reason for this is that cricket is the number one sport in many countries with huge populations, such as India, Pakistan and Bangladesh. It is popular in many other countries as well, including the U.K., Australia, South Africa, Sri Lanka and New Zealand. Cricket is, like baseball, a "bat and ball" game in which bowlers "bowl" the ball and batsmen try to hit "shots" with a bat and score runs for their team. As in baseball, batsmen are "out" if their shot is caught, or if they don't get to a "safe haven" in time when they're making runs. What is very different, however, is the time taken to play the game. In cricket, a single game in the traditional "Test match" format can take five full days to complete! But thankfully there are shorter formats for people who love to play the game but also have to go to work sometimes.

Cricket has been a team sport in Britain for hundreds of years. Even though there is evidence that the game existed in England as early as the twelfth century, it wasn't until the eighteenth century that it became a well-organized sport. This resulted from cricket's growing popularity within traditional gentlemen's clubs, especially in London. These clubs were devoted to their wealthy members' enjoyment of eating, drinking, gambling and sports. Cricket was the perfect game for such gentlemen. It was not too demanding physically and could be played with dignity even by slightly older gentlemen, unlike more athletic games such as football and rugby. In 1787, the development of the game took a step forward with the formation of the Marylebone Cricket Club by a group of powerful and wealthy cricket lovers. It was based at Lord's Cricket Ground near St John's Wood in London, and MCC members took it upon themselves to write the "Laws of Cricket", upon which the game is still based today. The MCC also became the governing body of cricket in England, in which it still has a role to this day, and also governed international cricket until 1909 when the ICC (International Cricket Council) was formed.

One of the biggest changes to the game in the nineteenth century was the replacement of under-arm bowling with over-arm bowling. This meant one of the most exciting parts of the game, fast bowling, was now possible. International matches also began in the nineteenth century, with the first match being between the U.S.A. and Canada in 1844. While the game never became popular in these two countries, it became very popular in most Commonwealth countries and an international system of "Test matches" between these countries soon developed. The first official Test match was between England and Australia in March 1877 at Melbourne Cricket Ground, which the Australians won by 45 runs. Test cricket is the most demanding form of the game, with matches lasting up to five days. In the late twentieth century, shorter forms of the game developed, such as One Day Internationals and the Twenty20 format. These developed in order to satisfy demands for shorter, faster games that would make exciting viewing on television. An example of this development is the Cricket World Cup, a tournament in the one-day limited-over format, which is held every four years and has now become the world's third most viewed sporting event. Cricket, like most other sports, has now become very big business, and the media form a major source of income for teams, players and governing bodies alike. 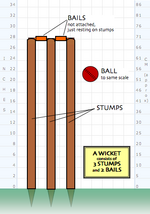 A cricket match is usually played between two teams of eleven players on an oval-shaped grass field. In the centre of the field is a strip of hardened turf 22 yards (20.12 m) long, called a cricket pitch. At each end a set of three tubular stakes called "stumps" are stuck upright in the earth with two small pieces of wood, called bails, balanced across the top of each set. These are the wickets, and a batsman stands in front of a wicket with his long wooden bat as he waits for a bowler to bowl the hard, fist-sized ball. The bowler bowls from just beside the wicket at the other end of the pitch. At the same time, the other members of the bowler's team stand in various positions around the field acting as fielders. If the batsman misses the ball, and the ball hits the wickets, he is out and his turn to bat is over. If he hits the ball into the air and a fielder catches it, he is out. If a ball which the umpire thinks is going to hit the wicket is blocked by batsman's legs, he is out lbw (leg before wicket). But if the batsman hits the ball, he and his batting partner, who is standing at the other end of the pitch, can run to the opposite ends of the pitch to score one run. They can score two runs by each running back again. Three runs are scored if each batsman runs three lengths of the pitch, and so on. But if a fielder gets to the ball and throws it at one of the wickets, and the ball hits the wicket before a running batsman crosses a line near the wicket called the crease, the batsman is "run out". In the Test match format, teams take turns to bat, and each team continues batting until ten players have gone "out", or until the team's captain "declares" and his team finishes its innings early. A captain can do this to ensure his team has a chance of winning the match, which they can only do if there's enough time left for both teams to complete two innings. If they do, the team with the highest run total wins. But if the five days allowed for the match have passed before both teams have completed two innings, the match is a draw. In the shorter forms of the game, each team has just one innings in which to bat, and the innings is sometimes limited to a fixed number of overs. The team scoring the most runs in its innings is the winner. 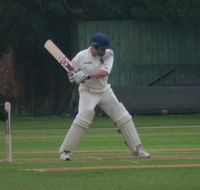 Most players specialize in batting (see right) or bowling, or they are "all-rounders", meaning they are good at both. Each team also has a wicketkeeper, who stands behind the wickets and catches any balls that aren't hit by the batsmen. The central contest in cricket is between a batsman and a bowler. A batsman's job is to hit shots and score runs, while a bowler tries to get batsmen out, or take wickets, while trying to prevent runs from being scored. A bowler bowls six overarm balls in one over, and then returns to his fielding duties while another bowler bowls another six-ball over from the other end of the pitch. There are several styles of bowlers, including fast bowlers, leg spinners, off spinners, swing bowlers and medium-paced bowlers. Most bowlers specialize in one type of delivery, and most deliveries are supposed to hit the pitch once and bounce up again before reaching the batsman. A ball which doesn't bounce, but reaches the batsman on the full, is a full-toss. Spin bowlers use the fingers or the wrist to put spin on the ball so that it doesn't come straight up off the pitch after bouncing, but bounces up at an unexpected angle. Swing bowlers try to get the ball to move unexpectedly through the air, while fast bowlers try to beat the batsmen with speed. If a batsman manages to hit the ball, he could hit one of several shots. These include drives, hooks, cuts and blocks. If a player hits a shot over the boundary line at the edge of the field on the full, he has "hit a six" and gets six runs. If the ball bounces or runs along the ground on the way to the boundary, he has "hit a four". One of the most important skills a batsman needs is the ability to place his shots between the fielders so that he won't be caught out, and so that he has time to score runs before a fielder can get to the ball and throw it back towards the wickets. 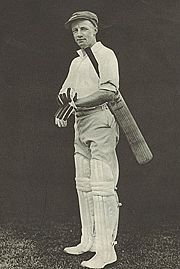 Around the time of the First World War, a young boy in the small Australian town of Bowral spent hours every day playing alone with a cricket stump, a golf ball and a water tank. He'd use the stump to hit the ball against the tank's brickwork base, and the golf ball would bounce back quickly at unpredictable angles. But the boy became so fast that he could hit the ball with the stump again and again without letting it touch the ground. The boy went on to use the quick reflexes and sharp eye he developed beside the water tank to become cricket's greatest batsman of all time.

Sir Don Bradman (1908 - 2001) played in 52 Test matches for Australia from 1928 to 1948. His Test batting average of 99.94 is generally regarded as one of the most remarkable achievements in any sport. The next best batting average for a player who has played more than 20 Test match innings is just 60.97 by South Africa's Graeme Pollock. Before his last Test match, at The Oval in London, Bradman's Test batting average was 101.39. But in his last innings he was bowled by the second ball he faced. If he had scored just 4 runs, his average would have been over 100, but having scored no runs, he finished his Test career with an average of 99.94 runs per innings. For many years it was claimed that the magnificent ovation Bradman received as he walked out to the pitch for his last Test match had left him with tears in his eyes, and the tears had made him miss the ball and "go out for a duck". Bradman always claimed there was no truth to this story.