This page covers the vocabulary and language of football by looking at its background, equipment and people. Check your understanding with the vocabulary quiz and comprehension quiz.

The earliest known form of the game was developed in China around 500 B.C. It was known as cuju ('kick-ball') and was played with a leather ball. The object was to kick the ball into a net stretched between two goal-posts. By 800 A.D. there was a well-organized professional league in China, and similar games were also being played in Korea and Japan.

The earliest form of the game that we know of in Europe was played in England around 1100 A.D. It was played between big teams, sometimes whole villages, on a large field, and the ball could be thrown, kicked, or carried towards the opponent's goal. There were very few rules and games were often wild and rough. The game was repeatedly banned by the authorities because of the violence and injuries it caused.

The modern game is played by two teams of eleven players on a rectangular field with a goal at each end. Players pass the ball to each other by kicking or heading it, with the aim being to score goals by getting the ball into the opponent's goal. The game lasts for two 45-minute halves, and the team scoring the most goals wins. Draws are common, but if a winner has to be found, a game can go into extra time. If the score is still tied after thirty minutes of extra time, a 'penalty shootout' can decide the winner.

In general play, the goalkeeper is the only player who can touch the ball with the hands or arms. All the other players can kick or head the ball only. Players can tackle an opponent in order to get the ball from them, but must do so without pushing or tripping the player. Pushing and tripping, along with other illegal actions such as 'handball' and 'offside', are fouls that can be penalized with a free kick. If a foul is committed in the penalty area near either goal, the referee can award a penalty kick, meaning a player can have a free shot at goal, with only the goalkeeper being allowed to try to block it. If a player commits a more serious offence, such as dangerous play, the referee can issue a yellow card as a warning, or issue a red card, in which case the player is sent off and cannot be replaced by a substitute. Teams are normally allowed three substitutes, which can be used to replace players because of injury, or for tactical reasons.

Edison Arantes do Nascimento, or Pele, is rated by many as the greatest footballer of all time. The Brazilian champion was given the title of Athlete of the Century by the International Olympic Committee and jointly named FIFA Player of the Century with Diego Maradona. He was part of three World Cup winning teams, and was known for his brilliant passing, his speed, his strong heading of the ball, as well as for his brilliance at shooting for and scoring goals. 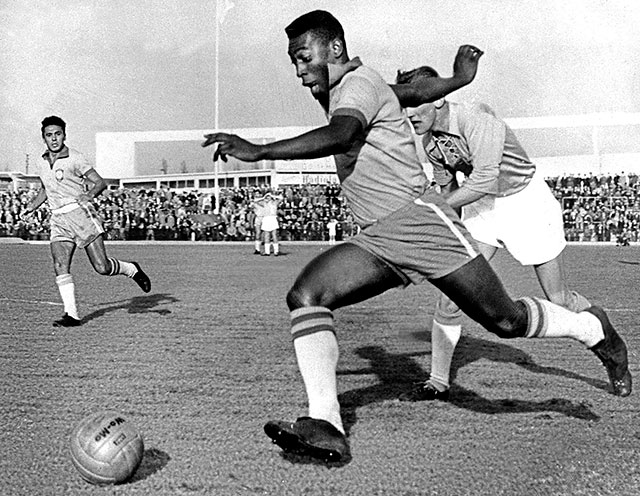 Pelé dribbling past a defender while playing for Brazil in Sweden, May 1960 (Wikimedia commons / Public domain)

Diego Maradona is one of the most well-known footballers of all time. He played in four World Cups for his country Argentina, and led them to their victory over West Germany in 1986. He also won many trophies with Boca Juniors in Argentina, FC Barcelona in Spain and SSC Napoli in Italy. Together with Pele, he was named FIFA Player of the Century in 2000. Maradona had a stocky build and his strength and speed made him a difficult opponent for defenders. He had great ball-control and passing abilities, and was often able to create goal scoring opportunities for his teammates. He also scored many goals himself, including 34 goals for Argentina in international competitions.