This page covers the vocabulary and language of golf by looking at its background, equipment and people. Check your understanding with the vocabulary quiz and comprehension quiz.

The dream of many people is to make lots of money, retire from work, and then spend the rest of their days walking around beautifully kept parks with finely-cut lawns, grassy fields and groves of leafy trees. They dream of visiting these parks, or courses, day after day, and of using long metal sticks, called clubs, to hit a little white ball towards, and finally into, a small hole or cup in a manicured lawn they call a green. What they are dreaming of, of course, is playing the game we call golf. It is one of the few sports that nearly everyone can play, regardless of age, body shape, or level of fitness. It is a good form of light exercise, it can help people to relax, and it gives them plenty of time between shots to chat, joke around, or even discuss serious topics like business with their playing partners. As a result, golf has become a very popular game, enjoyed by millions of people in nearly every country of the world.

The first recorded game of golf was played at Bruntsfield Links, in Edinburgh, Scotland, in A.D. 1456, and until recently most historians believed the game originated in Scotland in the 11th century. But new evidence suggests a game very similar to golf was played in China during the Song Dynasty (A.D. 960-1279). It was played with 10 clubs similar to modern golf clubs, and Chinese records and drawings show the clubs were used to hit small balls into holes in the ground, just like in modern golf. This game could have been introduced to Scotland in the 11th century by Mongolian traders and travellers.

One of the oldest and most important organizations in the history of golf is the Royal and Ancient Golf Club of St Andrews (R&A) in Scotland, founded in 1754. The club's course had nine holes, and players would go around twice to complete a full round. As a result, eighteen holes became the standard number of holes in a round of golf. The rules of golf also originated at the R&A, although now they are jointly controlled by the R&A and the United States Golf Association (USGA).

How The Game Works

Golf is played on specially-designed course consisting of a series of numbered holes. Some holes are short, just two or three hundred metres, while others are longer, up to five or six hundred metres. Each hole has a tee-off area, or tee box, from which the first shot is played. Then a long fairway with short grass leads to a small area of very short grass called a green. There's is a small hole in the green called a cup in which a pin stands with a flag flying on it. The object of the game is to hit the ball and get it into the cup with as few shots as possible. But course designers don't want to make this too easy, so they build hazards into the course. On both sides of the fairway, and around the green, areas of long grass called the rough are usually found. Areas thick with trees and bushes are also common, along with hazards such as bunkers, lakes, creeks and gullies. 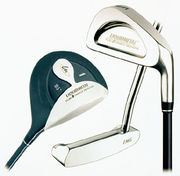 Most golf courses have eighteen holes, though some only have nine. Players use one of several clubs to hit the ball towards the green, and then into the cup. Players carry up to fourteen clubs in a golf bag, or they have a caddie carry them. These clubs (see picture at right) include woods for long shots (on the left), irons for medium-length shots (top), and a putter for shots hit along the ground on the green (bottom). Players also carry their own score card, and record every stroke they play on each hole. Each shot, whether it's a three-hundred metre drive or a two-centimetre putt, counts as one stroke.

For each hole, a number known as par indicates the number of shots a very good player would normally take to complete the hole. Short holes are usually "par 3", medium-length holes are "par 4", while longer holes are "par 5". If a player completes a hole in one shot less than par, they have made a birdie. Two shots under par is an eagle and three shots under par is an albatross. One shot over par is a bogey, two shots over par is a double bogey and three shots over par is a triple bogey. If we add up the pars of all the holes on an eighteen-hole course, we find the par for the whole course. Most courses are par 72, with four par-3 holes, ten par-4 holes, and 4 par-5 holes. If a player shoots a round of 70 on a par 72 course, we can say they shot a "two-under-par" round. In most formats of the game, the winner is the player who completes a round, or a series of rounds, with the lowest number of strokes.

As recreational golf became a popular hobby, professional golf became big business. Television broadcasts of major tournaments attract millions of viewers worldwide, and professional golfers play for millions of dollars in prize-money in hundreds of tournaments held all over the world. The biggest prize-money is offered in tournaments which are part of major tours such as the European Tour, the U.S. PGA Tour, and the U.S. LPGA Tour. Players must qualify to play on these tours, but qualifying is very difficult. Those who can't qualify can join other smaller tours such as the high-paying Japanese Tour.

The four most important tournaments in men's golf are called 'the majors', held every year. They are The Masters, the U.S. Open, The Open Championship (also called The British Open) and the PGA Championship. A player who wins all four majors in a single year has achieved a "Grand Slam", while a player who wins each major at least once during his career has achieved a "career Grand Slam". The total number of major tournaments a player wins determines his status in golfing history, and the current leader is Jack Nicklaus with 18 majors, although Tiger Woods is fast approaching this number.

Women's golf doesn't have a set of widely-recognised major tournaments, but the most important of the current events are the Kraft Nabisco Championship, the LPGA Championship, the U.S. Women's Open and the Women's British Open. 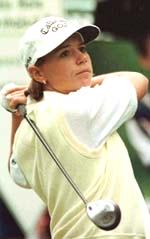 Annika Sorenstam, born near Stockholm in Sweden in 1970, is one of the greatest female golfers of all time. She won a record 8 Player of the Year awards between 1995 and 2005. Annika (at right, after playing a wood shot) has also won over 70 LPGA tournaments and nearly 20 other international tournaments. In 2008, she topped the LPGA's all-time money list with career earnings of over $21 million, $7 million more than any other female golfer. During her career she was the only female golfer to have shot a 59 in competition, and in 2004 she achieved the all-time lowest season scoring average of 68.6969 shots per round.

Eldrick "Tiger" Woods (right, teaching a boy how to hold a golf club) is one of the most successful golfers of all time. Born in 1975 to an African-American father and a Thai mother, Tiger played golf from the age of two. 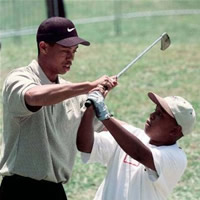 As a boy he was the best young golfer in the world, winning the Junior World Championship six times. In 1994, Woods became the youngest ever winner of the U.S. Amateur Championship. After winning this event two more times over the next two years, Tiger turned professional in 1996. Since then he has won over 60 PGA events, including more major titles than any other golfer in history except for Jack Nicklaus. He is also the youngest player to achieve the career Grand Slam, and he won his first 50 PGA tournaments at a younger age, and in less time, than any other player in golf's history. He has been awarded PGA Player of the Year a record nine times, and the Byron Nelson Award for lowest adjusted scoring average a record eight times.