This page covers the vocabulary and language of gymnastics by explaining its history and the events you can see at the Olympic Games.

Gymnastics is a sport that tests strength, balance and the ability to bend your body and perform acrobatic movements. Like athletics and wrestling, it originated in ancient Greece as part of military training. By the 19th century physical education for boys in Europe included gymnastics, and several gymnastics events for men were included in the first modern Olympic Games in 1896. Old-fashioned attitudes kept women and girls out of gymnastics until the 1920s, and the Olympic Games didn’t include events for women until 1928.

Gymnastics is now part of physical education for boys and girls in nearly every country, and gymnastics has become one of the most popular sports at the Olympic Games. The Games feature three competitions; rhythmic gymnastics for women only and artistic gymnastics and trampolining for both men and women. 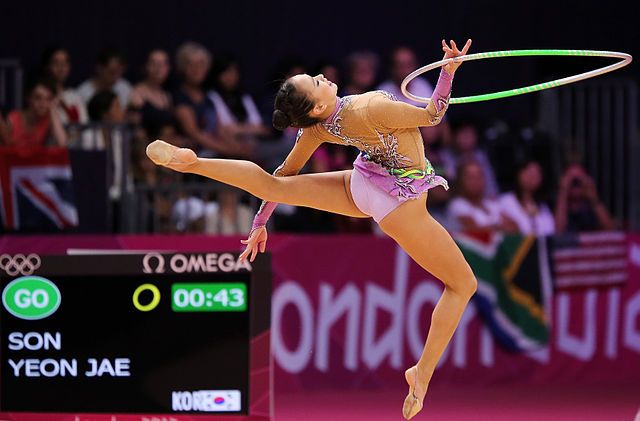 Rhythmic gymnastics combines elements of ballet, artistic gymnastics and rhythmic dance performed on a large mat. There are five events and each is performed with a different apparatus:

Competitors are judged for leaps, balances, pirouettes (spins), apparatus handling and execution. Even though rhythmic gymnastics is becoming more popular among men and boys, the Olympic Games only includes events for women. 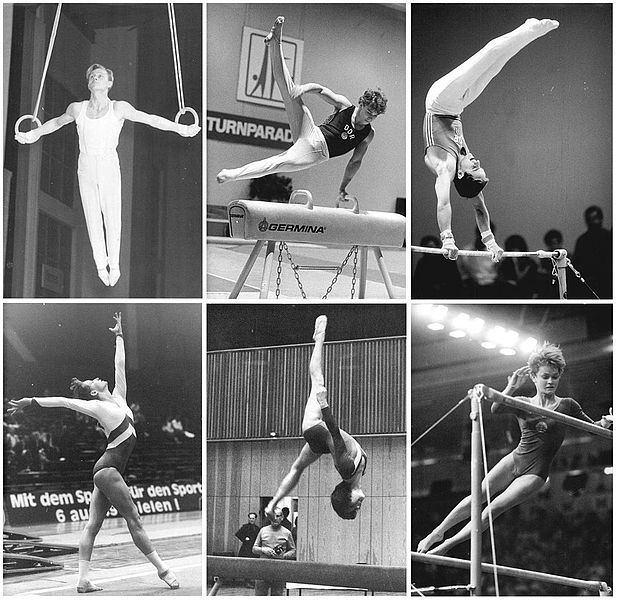 Floor exercise events are held on a 12m x 12m square mat on which competitors perform handstands and complex tumbling lines with handsprings, somersaults, and mid-air twists. In the pommel horse event, gymnasts mount a pommel horse and perform handstands and support their weight on their arms while swinging their legs. In the rings event, gymnasts are lifted up so they can reach two rings suspended from a wire, and then perform swings, handstands and other difficult positions before doing a spectacular dismount. In the event called vault, competitors hurdle onto a springboard and vault over the vaulting horse and perform mid-air twists or somersaults before landing. In parallel bars and horizontal bar, gymnasts perform a series of acrobatic swings and turns before performing a spectacular dismount. Like all events that include a dismount, a solid landing without losing one's balance is very important.

The four artistic gymnastics events for women are:

Floor exercise and vault are similar to the men's events of the same name, and uneven bars is similar to the men's parallel bars. The apparatus used in the balance beam is a narrow padded beam on which competitors perform leaps, somersaults, turns and dance steps before finishing with a dismount.

The Olympic Games also includes trampolining events for men and women. Competitors begin with a build-up during which they jump higher and higher on the trampoline, followed by a number of very high bounces during which they perform spectacular mid-air somersaults and twists.