This page covers the vocabulary and language of hockey by looking at its background, equipment and people. Check your understanding with the vocabulary quiz and comprehension quiz.

There are many games in which two teams compete to get control of a ball (or a puck) by using a stick, and then shoot it into their opponents' net to score a goal. Some of these games are played on a pitch, some on ice, and some on a road or in an empty parking lot. In some of them players wear running shoes, and in others they wear ice skates, roller skates or flippers. In one form players ride unicycles, and in an underwater version called "Octopush" players hit a puck along the bottom of a swimming pool. All of these games have one thing in common; they are all forms of hockey. But only one of them is played in the Summer Olympic Games, and that's the one you'll read about here. Its full name is "field hockey", though it's usually just called hockey.

The first sport we know of that seems similar to hockey was played in Ancient Egypt over 4,000 years ago. There are no records of the modern form of the game until its appearance in English schools in the 18th century, and the formation of hockey clubs in the 19th century, the first of which was formed in 1849 at Blackheath in south-east London. During this time the game became popular among British military officers and soldiers, and they introduced it to many of the countries Britain was then colonizing. To this day, field hockey is popular in places that were once part of the British Empire, and it is even the National Game of two such countries; India and Pakistan. The game is also a popular sport for men and women in parts of Europe, South Africa, and Australia, but in North America and Northern Europe, including Russia and the Scandinavian countries, field hockey's "cousin" ice hockey is a much more popular game. 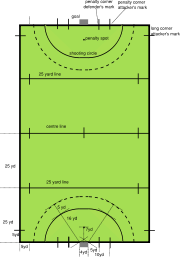 Field hockey is played on a pitch that is 100 yards long and 60 yards wide, divided by a center line and two 25 yard lines (see diagram at right). Synthetic surfaces are often used these days, but grass was the traditional surface. Players use hooked hockey sticks to hit, push, pass or dribble a small, hard ball, with the aim of scoring by getting the ball into their opponents' goal. Each team has up to 16 players, of which 11 can be on the pitch at any one time. These include a goalkeeper plus 10 "field players", including attackers, defenders and midfielders. Players can run with the ball (called dribbling) by controlling it with their stick, or they can pass the ball to a teammate, or score a goal, by hitting it with their stick.

A hockey stick has a rounded side (the right-hand side) and a flat side (the left-hand side), and only the flat, left-hand side, and its edges, can be used to play the ball. Field players must not use their feet, or any other part of the body, to control the ball. Only goalkeepers can use their hands, feet, etc. to block or hit the ball when they're inside their own shooting circle. Players can lift the ball into the air with a scoop, a long pushing action of the stick, as long as doing so doesn't endanger other players. When the ball is in the air, a player must not play it if it's above shoulder height unless they're using their stick to block a shot on goal.

Goals can be scored from general play or from penalty corners or penalty strokes. A goal from general play has to be scored from inside the shooting circle in front of goal. A penalty corner can be awarded by an umpire if a defending player commits a foul inside the shooting circle, or in any other part of the pitch between the back line and the 25 yard line. To take a penalty corner, one of the attackers stands with the ball on the back line while the other attackers wait at the top of the shooting circle. Up to four defenders, plus the goalkeeper, stand near the goal in defensive positions. The defenders’ teammates must stand beyond the centre line until the corner is taken. The player taking the penalty corner “pushes out” the ball and the waiting attackers then try to score a goal.

A penalty stroke is a free shot on goal from a spot 7 yards out, and only the goalkeeper can try to stop it. A penalty stroke may be awarded for any of several serious fouls, including illegally stopping an attacker from scoring a goal.

A hockey match usually lasts 70 minutes, with two 35-minute halves. The team with the most goals at the end of the game is the winner. Games can end in a draw, but if a winner must be found, such as in the World Cup or at the Olympics, a tied match will go into extra time, with the first team to score in extra time being the winner. If neither team scores in extra time, the result is decided by a penalty stroke competition, which is similar to a "penalty shoot-out" in soccer.

The most important competitions for field hockey are the Olympic Games, the Hockey World Cup, and the Commonwealth Games. All of these competitions are held once every four years. In the men's game, India and Pakistan were the strongest teams until the 1980’s, but since then the Netherlands, Germany, New Zealand, Australia and Spain have also fielded strong teams. In the women's game, the Netherlands were the strongest team until the 1990’s, but Australia, Argentina, China, Korea, Germany and South Africa have also fielded strong teams since then.

The biggest of hockey's annual tournaments are the Champions Trophy for the year's six top-ranked national teams, and the Sultan Azlan Shah Hockey Tournament. The latter has been held in Malaysia every year since 1983 and has become one of the sport's most popular events, with teams coming from all over the world to participate.