This page covers the vocabulary and language of ice hockey by looking at its background, equipment and people. Check your understanding with the vocabulary quiz and comprehension quiz.

Ice hockey and field hockey are two of the most popular and well-known forms of hockey. Both are played at the Olympic Games, although field hockey is played at the Summer Olympics and ice hockey is played at the Winter Olympics. Like field hockey, women's ice hockey is a non-contact sport, but men's ice hockey is a full-contact sport in which heavy collisions often occur. Players skate over the ice at high speeds, so the game is fast, rough and exciting to watch. As a result, it's become a major spectator sport, especially in North America where it is a billion-dollar industry. This industry, as well as the sport itself, is run in North America by the National Hockey League (NHL). But in the rest of the world, the sport is governed by the International Ice Hockey Federation (IIHF).

Even though Europeans had skated on ice for centuries, and played hockey-like games for just as long, the two weren't combined until early in the 19th century. This happened in an area of Canada that European settlers called Nova Scotia. The area is the traditional homeland of the Mi'kmaq people, who'd also played a game like hockey for centuries. The settlers had brought over their own hockey-like games in the 18th century, including hurling from Ireland and shinty from Scotland. We don't know which of these games, if any, was the first to be played on ice, but we do know that the first ice hockey sticks were carved from ironwood by the Mi'kmaq people in the 1850's. They sold them to traders, who began buying more and more of them as the game spread across Canada. By 1870, people in Montreal were playing the game, and by 1875 they were using a small, wooden disc instead of a ball. They'd discovered that after being hit, a disc would stay closer to the ice than a ball and was less likely to hurt them. Then in 1877 they formed the first ice hockey club and wrote the first rulebook. The game soon spread to the USA where a league was formed in 1893, and then to Europe where the first European championship was held in 1910. In 1920, men's ice hockey was played at the Olympic Games for the first time, but women's ice hockey wasn't included until 1998, even though international competitions had been held since the 1920's.

The Mi'kmaq people's hand-crafted "Mic-Mac Hockey Sticks" dominated the market for ice hockey sticks until cheap, factory-made sticks appeared in the 1930's. These new sticks were also made of wood, and it wasn't until the 1990's that sticks made of other materials like graphite began to appear. As well as hockey sticks, players need skates and a lot of protective equipment. Ice hockey skates must protect a player's feet from hard blows, so they're heavier and stronger than skates made for racing or figure skating. Other protective equipment includes a helmet with a face cage or face shield, a neck guard, shoulder pads, elbow pads, hockey gloves, protective hockey pants, genital or pelvic protectors, shin guards and a mouthguard or gumshield. Despite all this protective equipment, injuries can still occur. The most serious of these is long-term brain damage caused by repeated blows to the head. This can occur even if a helmet is worn, but research has shown that a full face shield can greatly reduce the risk of this, and parents are strongly advised to ensure their children wear helmets with full face shields. 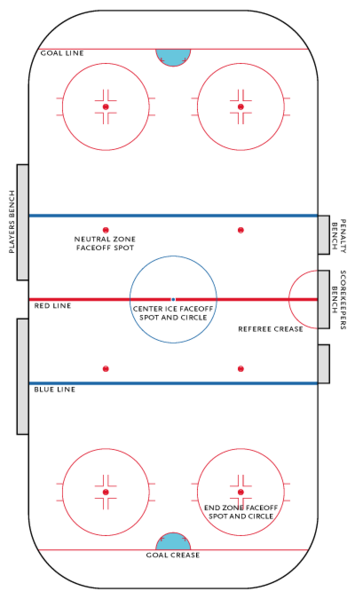 The rules of ice hockey are sometimes changed, usually to make the game safer. But not everyone has agreed on these changes, so there are some differences between the NHL rules followed in North America and the IIHF rules followed in the rest of the world. The rules below are those of the IIHF.

Ice hockey is played by two teams on a rectangular hockey rink 61 metres long and 30 metres wide. The rink has round corners and is surrounded by a wall one metre high, with a transparent barrier above it. The officials include one or two referees, two linesmen, two goal judges, a scorekeeper, a timekeeper, an announcer, two penalty bench attendants and a video goal judge. The game is played over three twenty-minute periods. Each team has eighteen players, six of whom can be competing at any one time. At each end of the rink is a net-covered metal frame called a "goal". A player scores by using his hockey stick to hit a small, disc-shaped "puck" into the opposing team's goal. Each team has a goaltender who guards the goal and tries to block these shots. All other players can move freely around the ice, trapping, controlling and passing the puck to create goal-scoring chances. In men's ice hockey, players can hit or "bodycheck" an opponent who's controlling the puck, although hits from behind are penalized. In the women's game, all bodychecks are penalized. 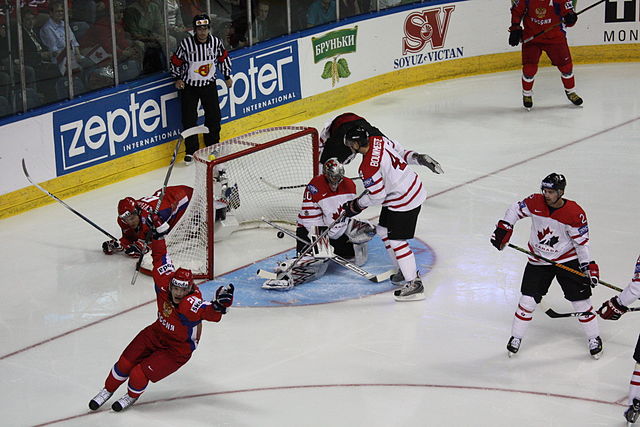 Two blue lines across the ice divide the rink into three zones; an attacking zone, a neutral zone, and a defending zone. Referees use these lines to judge whether a player is in an "offside" position, meaning they've entered their team's attacking zone while the puck is still outside it. There's also a red "centre line" across the ice that divides the rink into two equal halves. Referees use this line to judge whether an "icing" violation has occurred, meaning a player has hit the puck from behind the centre line and past their opponent's goal without it being touched. Play stops after an offside or icing violation, and starts again with a "face-off". In a face-off, two players, one from each team, face each other at one of the nine "face-off spots" and the referee drops the puck between them. The players then battle with their sticks for control of the puck. Face-offs also occur at the start of play, or after penalties are called, a puck goes out of play, or a goal is scored. 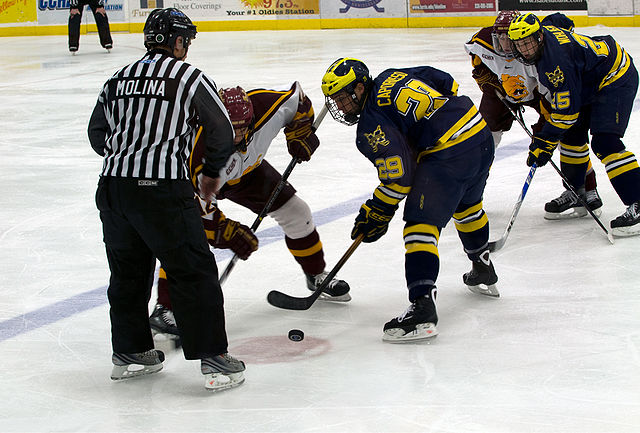 Players battle for the puck during a face-off. Photo: Greg Sommers / CC-BY-2.0

Penalties of various types can be awarded for a range of infractions. These include a "minor penalty", in which a player is sent off for two or four minutes. These are awarded for taking hold of the puck, holding a player or their stick, delaying play, abusing an official, or for tripping, boarding, elbowing, kneeing, charging, striking with a hockey stick, etc. A "major penalty", in which a player is sent off for five minutes, is for any of the above infractions if they cause an injury, or for kicking and head-butting. A "match penalty" or "game misconduct penalty", in which a player is sent off for the rest of the game, can be applied if a player deliberately injures an opponent. When one team has more players on the ice than the other after a player has been sent off for a penalty, it has a "power play", meaning a better chance of scoring than usual. If a player is unfairly prevented from shooting for goal, a penalty shot can be awarded. The player taking the penalty shot moves in from the centre line, with only the goaltender to beat when shooting for goal. Players can also be suspended for a number of games, or even for life, if they commit a very serious infraction.

Professional ice hockey leagues exist in many countries, but North America's NHL is the richest and most powerful by far. It was established in Montreal in 1917 and the first US team joined in 1924. The NHL, which now includes many clubs in the USA and several in Canada, controls the billion-dollar industry surrounding ice hockey in North America. It sells the rights to televise games or carry its logo for huge sums of money, and teams in the NHL pay top players millions of dollars a year. Top NHL executives are also paid millions of dollars a year. Critics claim that NHL executives have refused to make ice hockey safer and less violent because they fear this would make the game less popular, and less money would be made from television broadcasts and other sources of income.

The most famous player of all time is the Canadian player Wayne Gretzky, nicknamed "The Great One". He played in the NHL for 20 seasons, and when he retired in 1999 he held 61 official NHL records. Many of those still stand today, including most career goals (894), most career assists (1963), and most career points (2857). He managed the Canadian men's ice hockey team in the 2002 and 2004 Winter Olympics, and was also named Canada's "Male Athlete of the 20th Century".

Video: Highlights from the 2013 IIHF World Championship semifinal between Switzerland and USA