See Wordchecker below for vocabulary and example sentences. 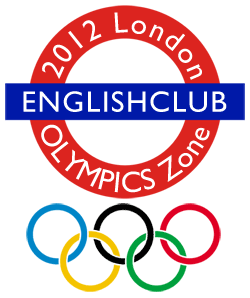 London won the right to stage the 2012 Olympics after competing against strong bids from New York, Madrid, Paris and Moscow. London also hosted the games in 1908 and 1948, making this event the third time the games had been held in London since the modern Olympics began in 1896. The motto of the 2012 Olympic Games was "Inspire a Generation". 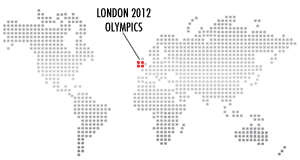 People from all over the world visited London for the Olympics, and they were among over 500,000 spectators who attended. Over 9,000,000 seating tickets were sold, with prices ranging from around $30 for standard seats at regular events to around $3,000 for the best seats at the Opening Ceremony.

The Opening Ceremony took place at the Olympic Stadium in London on July 27. It began with a spectacular show created by Oscar-winning film director Danny Boyle that presented a series of episodes depicting British history and culture. This was followed by The Parade of Nations in which thousands of Olympic athletes marched into the stadium behind their national flags.

Formal speeches followed during which the 2012 Olympic Games were formally opened by Her Majesty Queen Elizabeth II. After a fireworks display, the Olympic Torch arrived on a motorboat driven by English footballer David Beckham. The Olympic Cauldron was then lit and the ceremony ended with another fireworks display and Paul McCartney and his band performing the Beatles song Hey Jude. The Opening Ceremony was watched on television by an estimated audience of around 900 million people.

For the next 16 days athletes competed with all their might for one of the 2,300 Olympic medals awarded in 302 events covering 26 sports. The previous Olympic Games in Beijing, China, had featured 28 sports, but the International Olympic Committee (IOC) decided to drop baseball and softball from the London Olympics. On the other hand, women's boxing was included for the first time, making the London Games the first Summer Olympics in which female athletes competed in every sport. By the end of the Games, 85 countries had won medals. The United States had won the most medals (104), followed by China (88), Great Britain (65) and Russia (81). Countries winning their first ever Olympic medal were Bahrain, Botswana, Cyprus, Gabon, Grenada (a gold medal), Guatemala, and Montenegro.

The London Olympics saw several outstanding achievements. U.S. swimmer Michael Phelps won the most medals and became the most decorated Olympic athlete of all time. He won 4 gold medals and 2 silver medals, bringing his total number of medals from the 2004, 2008 and 2012 Olympics to 22, including 18 golds. Jamaican sprinter Usain Bolt won gold in the 100 metres, 200 metres and 4 X 100 metres races, repeating his performance at the 2008 Beijing Olympics to become the first man to win six Olympic gold medals in sprinting. 17-year-old Missy Franklin from the U.S. won 4 gold medals and a silver in women's swimming events, and Somali-born British runner Mohamed "Mo" Farah won gold medals in both the Men's 5,000 and 10,000 metres. Kenyan runner David Rudisha was the only competitor to break an athletics world record at the Games when he won gold in the Men's 800 metres.

After all the events had been held, and all the medals had been awarded, the Closing Ceremony took place on August 12. At the end of this ceremony the flame in the Olympic Cauldron was extinguished, and the games were over. 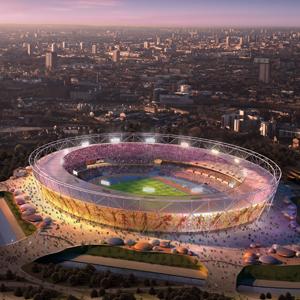 Many of the events in the 2012 Summer Olympic Games were held at Olympic Park in Stratford in the east of London. Olympic Park covered an area of 500 acres (200 hectares) and featured the newly-built Olympic Stadium, the London Aquatics Centre, the Basketball Arena, the London Velopark, and the Riverbank Arena. The 80,000-seat Olympic Stadium (seen here), built at a cost of over $1,000,000,000, was where the track-and-field events, as well as the opening and closing ceremonies, were held. The swimming and diving events were held in the 17,500-seat London Aquatics Centre. It was built at a cost of over $500,000,000 and housed two 50-metre swimming pools and a 25-metre diving pool. The 12,000-seat Basketball Arena hosted the basketball and handball events, while field hockey was played in the 15,000-seat Riverbank Arena. The London Velopark featured a 6,000-seat velodrome for the indoor cycling events, a 6,000-seat outdoor BMX track, as well as a one-mile road course and a mountain bike track. Olympic Park was also the location of the Olympic Village where nearly 18,000 athletes and officials were housed in 3,300 apartments, each featuring a TV, internet access and a private courtyard. The Olympic Village also featured a huge dining room that could feed up to 5,500 hungry athletes at any one time.

Olympic Park was located in the Olympic Zone, one of three zones in London in which events were held. The other two zones were the River Zone and the Central Zone. 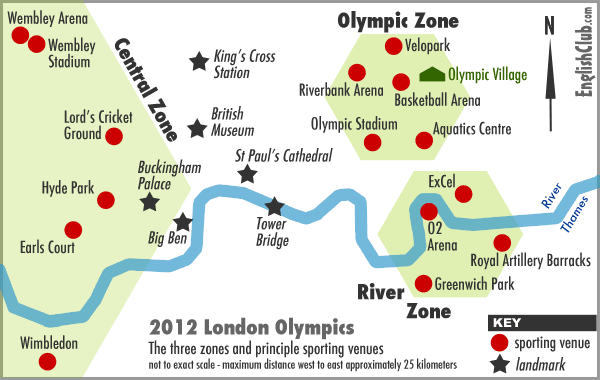 Several events were held outside London, including canoeing and rowing on Dorney Lake in Buckinghamshire, sailing at the Weymouth and Portland National Sailing Academy on the south coast of England.

motto (noun): a short statement that expresses an aim or a belief - Our school motto is “Carpe Diem”, or “Seize the Day” in English.

spectator (noun): someone who is watching a public event, such as a sports event - After scoring, Ronaldo waved at the spectators sitting behind the goal.

cauldron (noun): a large round metal container, often used for cooking - We cooked the soup in a huge cauldron that hung over the campfire.

might (noun): power or strength - We pushed the rock with all our might, but it wouldn’t move.

extinguish (verb): to put out a fire or a flame - It took the firemen over an hour to extinguish the fire.

venue (noun): the place where a sporting event or a concert is being held - The venue for this concert can hold around 50,000 people.

stadium (noun): a large sports ground surrounded by seats for spectators - Have you been to the new football stadium yet?

aquatics (noun): sports played in or on water - Our sports program includes tennis, athletics and aquatics.

arena (noun): a large building with tiered seating for sports events or concerts - We’re meeting at the basketball arena at 7 o’clock.

velodrome (noun): a place with a racetrack for cycling - Is the cycling team training at the velodrome tonight?

house (verb): to give someone a place to stay, or to provide space for something - The government should spend more money on housing the poor.

zone (noun): one of several areas a place is divided into - How much does a train ticket for zones 1 and 2 cost?

equestrian (adjective): related to riding horses - My daughter loves horses, so she wants to see the equestrian events.

barracks (noun): buildings in which soldiers live - The main army barracks are near the centre of the city.

academy (noun): a school or college that teaches a particular subject or skill - Do you really want to apply for a place in the police academy?