This page covers the vocabulary of the Winter Olympics by looking at its background, events and people.

The Winter Olympic Games, or the Winter Olympics, is the world's biggest tournament for winter sports or "sports practised on snow or ice" as defined in the Olympic Charter. Since 1924, the International Olympic Committee (IOC) has staged the event every four years except for 1940 and 1944 (during the Second World War). The Summer and Winter Olympics used to be held in the same year, but now they're held two years apart.

The first Winter Olympics was held in 1924 in Chamonix, France. It featured 258 athletes from 16 countries competing in skiing, skating, bobsleigh, curling and ice hockey events, but the only event in which women could compete was figure skating. In 1948 the IOC added three skiing events for women, and they've added many more events for women since then. The only event that's still limited to men is a skiing event called Nordic Combined.

The Winter Olympics now attracts around 3,000 athletes from around 90 countries. They compete for gold, silver and bronze medals in nearly 100 events in a wide range of winter sports.

Skating events include figure skating (5 events), Speed Skating (12) and Short Track Speed Skating (8). All these events are held on ice rinks, and competitors wear bladed boots called ice skates that allow them to move quickly and smoothly over the ice. In the figure skating events, competitors perform set moves like spins, jumps and lifts in choreographed programs set to music. In the speed skating events, skaters race on an oval track around the edge of an ice rink.

Skiing events include Alpine Skiing (10 events), Biathlon (11), Cross Country Skiing (12), Freestyle Skiing (10), Nordic Combined (3), Ski Jumping (4) and Snowboarding (10). They are held on snow-covered slopes or on flat, snow-covered plains. Competitors slide over the snow on long, narrow skis, and use hand-held poles to push themselves along. In alpine skiing events, competitors ski as fast as they can down a steep, winding course. In freestyle events, competitors perform mid-air acrobatics while skiing along a specially-prepared course. In ski jumping events, competitors try to go as far as possible through the air after skiing off a ramp. In cross-country events, skiers race over long distances on snow-covered plains (up to 50 km). Nordic Combined events involve both cross-country skiing and ski jumping, while biathlon events combine cross-country skiing with rifle shooting. In snowboarding events, competitors race or perform acrobatic moves on a single wide ski that resembles a large skateboard.

Sledding events include Bobsleigh (3 events), Luge (4) and Skeleton (2). They are high-speed time trials in which competitors on sleds (also "sledges" or "sleighs") slide down a steep, curving ice track, with the competitor recording the quickest time winning. In bobsleigh, or bobsled, teams of two or four competitors sit one behind the other in partially-covered sleds. In luge, individual competitors sit on small, lightweight sleds, while in skeleton competitors lie face-down on small sleds. 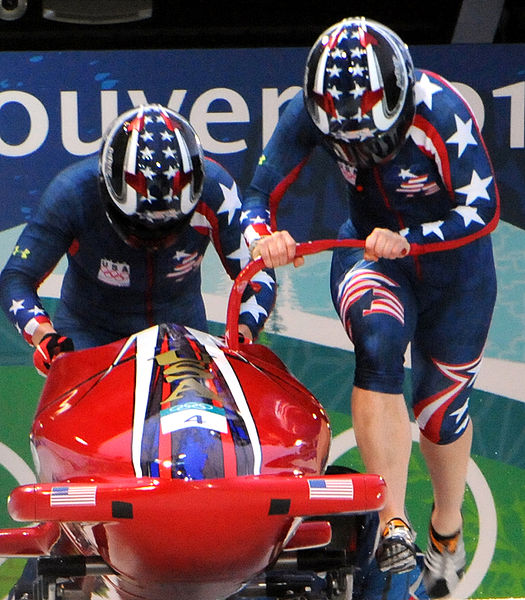 US two-woman bobsleigh team pushing off at the 2010 Winter Olympics. U.S. Army photo by Tim Hipps

The team sports of Curling (2events) and ice hockey (2 events) are played on ice rinks. In curling, each team slides large polished stones across the ice towards a circular target. Points are scored by whichever team leaves one of their stones closest to the centre of the target. The team with the most points after ten "ends" is the winner. In ice hockey, players carry ice-hockey sticks and try to score by using them to hit a small, flat object called a "puck" into the opposing team's goal.

The above sports video shows a wide range of Winter Olympic sports set to music.

charter (n): an official document that states an organization's aims and rules - The Olympic Charter is often revised by the IOC.

ice rink (n) (also "ice-skating rink"): a large flat area of ice, or a building containing this - There's an ice rink and a bowling alley on the top floor of the mall.

spin (n): a move in which a figure skater continually rotates - In many spins, skaters rotate on one foot while holding the other.

jump (n): a move in which skaters rotate in mid-air or skiers jump off a ramp - I still fall over a lot when I practise my jumps.

lift (n): a move in which a skater lifts his or her partner into the air while rotating - We're trying to learn a new lift, but it's not easy.

slope (n): the side of a hill or mountain down which you can ski or sled - The steeper a slope is, the faster you can go.

slide (v): to move smoothly over a wet or slippery surface - The kids were sliding down a grassy slope in old cardboard boxes.

steep (adj): rising or falling quickly, of a slope, path, mountain road, etc. - The path to the top of this hill is really steep.

sled (n) (also "sledge" or "sleigh"): something you can sit on that slides over snow or ice - Arctic explorers transported all of their supplies on sleds.

puck (n): a small, hard disc made of vulcanized rubber -I hit the puck past the goalie and scored a goal!