This page covers the vocabulary of the Summer Paralympics by looking at its background, events and people. 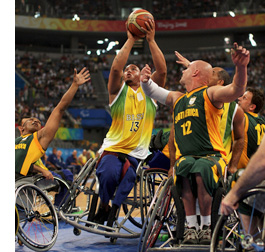 The Summer Paralympic Games, or the Summer Paralympics, is an international sporting tournament held every four years, shortly after the Summer Olympic Games. Thousands of athletes with a physical disability come from all over the world to compete. Some are missing one or more limbs, some have trouble controlling their muscles, and others might have a visual impairment. But they all come to represent their country with pride, and they all do their best to win a Paralympic Medal, either gold, silver or bronze.

In the first Summer Paralympic Games, held in Rome in 1960, 400 athletes from 23 countries competed in just eight paralympic sports. Since then the tournament has grown enormously. Now more than 4,000 athletes from over 150 countries compete in 20 sports. The current list of summer paralympic sports includes archery, athletics, basketball, boccia, cycling, equestrian, fencing, football, goalball, judo, powerlifting, rowing, rugby, sailing, shooting, swimming, table tennis, tennis and volleyball. Many involve the use of wheelchairs, such as basketball, boccia, fencing, rugby and tennis, while in others special equipment is used, such as the ball containing a bell that visually-impaired players of goalball listen to while they play.

There are several other international tournaments for athletes with disabilities, such as the Special Olympics World Summer Games for those with an intellectual disability, and the Summer Deaflympics for those with a hearing impairment. These tournaments aren't run by the International Olympic Committee, but the IOC and the IPC recognize them and allow them to use the term "Olympics".

disability (n): any condition that prevents full or normal use of the body or mind - Many people lead productive lives despite having a physical disability.

limb (n): an arm, or a leg - All these guys lost a limb while fighting in the war.

impairment (n): imperfect function of a body part or sense organ - Sue was born with her impairment, but mine was caused by an accident.

wheelchair (n): a chair on large wheels used by people who can't walk - It took me a while to get used to my wheelchair.

boccia (n): a wheelchair sport that's similar to lawn bowls - Do you know the rules of boccia?

mild (adj): not very serious, of an illness, injury, impairment, etc. - Some brain injuries are quite mild, but others are very serious.

severe (adj): very serious, of an illness, injury, impairment, etc. - Diabetes can cause severe visual impairment, or even blindness.