This page covers the vocabulary and language of skiing by looking at its background, equipment and people. Check your understanding with the vocabulary quiz and comprehension quiz.

Skiing is the action of travelling over snow or ice with one's feet placed on skis (long narrow pieces of wood or other material). There are many different forms of skiing. Some skiing events take place on icy mountain slopes and peaks and others take place on level or bumpy runs and trails. The three main types of skiing are Alpine, Nordic and Freestyle. Alpine skiing events take place on steep terrain. Many people call this "downhill" skiing. The boots are attached to the skis with bindings. The toe and heel of each boot are firmly fixed to the skis. Top downhill skiers can go 100 kilometres per hour or faster. Their average speed is similar to a car on a highway. Nordic skiing is generally for terrain that is less steep. In this type of skiing, the toe is fixed firmly to the ski, but the heel is free. The most popular type of Nordic skiing is "cross country". Freestyle skiing is a form of acrobatics. Skiers show off their skills by doing tricks.

Nordic skiing has been around for about 5,000 years. It likely developed as a method for hunting. Skis were carved out of wood. In Scandinavia, skiing was a major mode of transportation before it became a sport. Alpine skiing required more sophisticated bindings to hold the toes and heels to the skis. These were developed in the late 1800's. Downhill skiing originated in the European Alps. This is where it got its name. Nordic skiing became an official Olympic event at the 1928 Winter Games in Switzerland. This was the first year the Winter Olympics were recognized by the IOC. Alpine skiing was added in 1936. Since then many more skiing events have been added to the Olympic program, including the popular sport with one large ski better known as "snowboarding".

Different types of skiing require different equipment. The length of the skis worn depends on the type of skiing. Some skiers hold ski poles for balance and wear helmets to protect their heads. Many professional skiers wear goggles to protect their eyes as well. Ski lifts, chair lifts or gondolas are often used to transport skiers up to the top of a mountain to ski down a run. Snow-grooming machines are sometimes used when there is not enough real snow. Skiers call real fresh snow "powder".

In the Olympics there are various types of Nordic events, including individual races, relays, sprints, combined events, and races of different distances.

This event is held at the top of a hill. The hill can be "normal", "large" (higher), or "ski-flying" (highest). Skiers start at the top of the hill called an "inrun". They then jump from a ramp. The score for a ski jump is based on the distance and the style of the jump. Skiers make a V with their skis to clear the most distance. Ski jumping in the Olympics is a male-only event. Women ski jumpers hoped the sport would be added in 2010, but the IOC chose not to include it.

In this event, skiers must complete a cross-country race and at least one scored ski jump from the top of a ski hill. The distance, order and number of jumps in the Olympic Nordic combined event changes often.

This event involves cross-country skiing and rifle shooting. Skiers race around a track and make several stops to shoot at targets. When skiers miss a target they receive a penalty, such as having to ski an extra loop or having time added to their total. Racers are free to use either classic or freestyle forms of skiing.

In the Olympics there are five types of Alpine events, including the main four below, plus an event that combines downhill and slalom racing. Downhill and Super G are "speed events" while slalom and giant slalom are "technical events". Men and women compete in the following races against other skiers of their own gender. 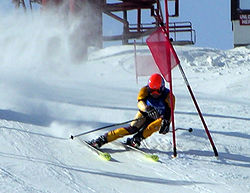 This is the longest type of downhill race. Skiers compete to have the fastest time. They have one run down a very steep hill that is usually covered in ice. Downhill courses (seen right) feature a variety of terrain including turns, jumps and straightaways.

This is a short course with sharp turns. Skiers must go through sets of gates (poles) that are very close together. In the Winter Olympics, skiers go down the run twice. The gates are moved for the second run. The two race times are added together for a total. Short skis are worn to maximize movement.

This is similar to slalom except that the gates are farther apart and the course is longer. The turns are not as sharp and the speeds are faster in the giant slalom.

This is an event that combines downhill and giant slalom events. It is a longer run than the giant slalom and skiers use the "tuck" position as they do in the downhill events. The gates are placed farther apart, allowing skiers to pick up a lot of speed. As in all of the slalom events, skiers are not allowed to take a practice run. They are permitted to view the course ahead of time.

Acrobatic skiing was previously known as "hot-dogging". It was a demonstration sport at the 1988 Winter Olympics and has been an official discipline ever since. The two main forms of freestyle skiing are aerials and moguls. Outside of the Olympics, skiers compete in many other freestyle forms. 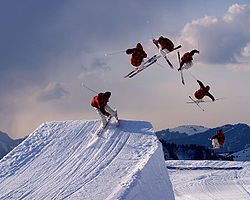 Aerials became an Olympic sport in 1994. Skiers jump off an elevated area and do flips, summersaults and other twists in the air. Their formation in the air is worth 50% of their score. Skiers are also judged on how high they "fly" and how well they "land".

"Mogul" is another word for "bump". Skiers race down a run that is full of moguls. Their score is based on how fast they ski and how well they turn corners and perform tricks.